The ‘Oldest British bones’ EVER date back to the Mesolithic era more than 9,000 years ago

Two boxes of human remains, including the bones of seven individuals, were discovered to be 9,000 years old, making them as old as the fabled Cheddar Man.

They were discovered in a cave in Cannington Park Quarry near Bridgwater, Somerset, in 1964 for the first time.

They vanished shortly after, but were recently discovered at Somerset Heritage Centre near Taunton, according to Cotswold Archaeology.

The fossils, which include the bones of at least seven people, were found in 1964 in a newly discovered cave.

Osteoarchaeologist Sharon Clough, of Cotswold Archaeology, said the results were very surprising as the bones were originally thought to be Roman and from a cemetery near to where they were discovered in 1964.

They were placed in boxes and transferred between museums, including London’s Natural History Museum, before they were misplaced.

‘It was a bit of a mystery, I’d assumed they had been archived with the rest of the dig from the post-Roman cemetery,’ Ms Clough said.

‘But they’d been picked out of the rubble in the cave and weren’t seen as part of the main dig so they were only mildly interesting and were archived and forgotten about.’

They were eventually tracked down to Somerset before undergoing carbon dating.

Ms Clough described the remains from at least seven individuals as ‘some of the oldest known humans to inhabit this country’.

Cheddar Man lived in the Somerset area 9,000 years ago and was buried in Cheddar Gorge where his nearly complete skeleton was discovered in 1903

She said two thigh bones, from an adult and an under 18, were found to be more than 9,000 years old ‘which places both of the bones very clearly in the early Mesolithic’.

Cheddar Man lived in the Somerset area 9,000 years ago and was buried in Cheddar Gorge, where his skeleton was discovered in 1903.

‘Cheddar Man has all the bits but we only have a lot of long bones, a few cranial parts and a couple of pieces of pelvis,’ she said of the latest discovery.

‘But it’s very exciting to find human remains of this date.’

She added the cave was ‘completely destroyed’ by quarrying in the 1990s, so the bones are the ‘only surviving evidence for what now appears to have been a rare Mesolithic burial site’.

HOW DID PEOPLE LIVE DURING THE MESOLITHIC PERIOD?

The Mesolithic period’s material culture is characterized by greater innovation than the Paleolithic.

Among the new types of chipped stone tools were microliths: very small stone tools intended for mounting together on a shaft in order to produce a serrated edge. Polished stone was another innovation that arose in some Mesolithic groups.

Northern European Mesolithic people (called Maglemosian’s), who flourished at about 6000 BC, left behind traces of primitive huts with bark-covered floors and adzes for working wood. 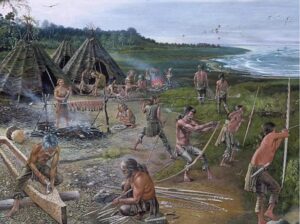 At Starr Carr in Yorkshire, there are signs that four or five huts existed there, with a population of around 25 people. There is evidence that these sites may only have been occupied on a seasonal basis.

Aracheologists have also found smaller flint tools from this group. These were mounted as points or barbs for arrows and harpoons and were also used in other composite tools.

They used adzes and chisels made of antler or bone, as well as needles and pins, fish-hooks, harpoons and fish spears with several prongs. Some larger tools made of ground stone, such as club heads, have also been found.

Wooden structures have also been found and have remained well-preserved due to the preservative qualities of bogs. Some of the structures discovered include ax handles, paddles and a dugout canoe, and fishnets were made using bark fibre.

Deer were hunted as well as fish and waterfowl, and some varieties of marsh plants may have been used.