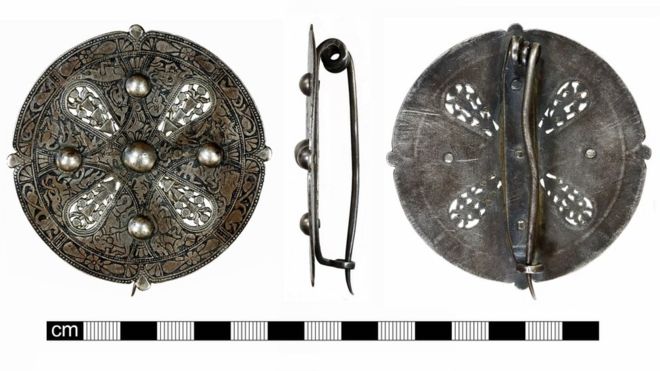 According to archeologists,the origin of a 1,100-year-old brooch found in a lorry of soil may be a “mystery” that never has been solved.

According to archaeologists who claim that the brooch is found in a lorry full of mud, the original location where it lies remains a mystery.

The precious silver object is from the end of the 9th century. This was discovered in Great Dunham, Norfolk,UK, where a area was developed for landscaping.

The brooch was discovered in a truck filled with soil during the landscape project. The landowner doesn’t know where the soil originated from exactly.

It is not known where the soil came from, but experts say the find is similar to the nearby Pentney Hoard. The British Museum said the discovery was of “national importance”.

An inquest – the process by which the find may be officially declared treasure – has been opened in Norwich and will conclude on 9 June.

The brooch was found by an inexperienced detectorist on 9 May 2019, on just his third-day detecting.

He initially thought the piece was Victorian, but when archaeologists at Norfolk County Council were alerted they visited the scene to excavate further.

During the dig, the team found a 19th Century plough buried beneath the level of the Saxon brooch, suggesting the brooch had been deposited from elsewhere.

The landowner said he had dumped topsoil on the field to level it, but did not know where the delivery had come from.

“He said he flagged down the occasional lorry,” said Steven Ashley, the council’s senior finds archaeologist.

“They wouldn’t have moved the soil very far, so it’s likely to be from central or west Norfolk somewhere.

“I think it would be very hard to trace the provenance of the brooch now. I think it will remain a mystery.”

The brooch, about three inches (7cm) in diameter, features a cross with concave arms, over a saltire, and is decorated with animals in the Trewhiddle style, with a fastening pin on the back.

Mr Ashley said the “remarkable” piece had similarities to the Pentney Hoard, a find of six disc brooches in 1978 in West Norfolk.

“It looks to me that they were made by the same craftsman or in the same workshop,” he added. Prof Michael Lewis of the British Museum said it was “of national significance”.

He said the brooch was likely to have belonged to someone of “relatively high status” because of its high silver content.