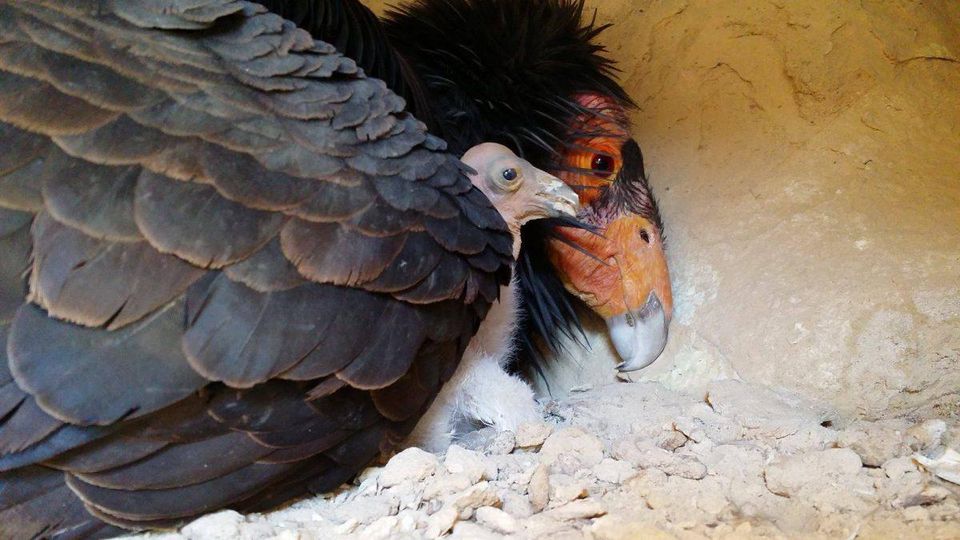 Thanks to modern technology, you can watch a threatened California condor chick growing up right in front of your eyes, thanks to a live streaming video mounted on the roof of the chick’s cliff-side home overlooking Pole Canyon, a remote area in California’s Hopper Mountain National Wildlife Refuge.

“Today’s technology allows researchers like us to observe nests in remote locations without having to trek into the backcountry and wait for days, sometimes weeks, at observation blinds for a glimpse of the condors,” Estelle Sandhaus, the Santa Barbara Zoo’s director of conservation and science said in an emailed press release.

But scientists aren’t the only ones interested in watching the family life of California condors. The first wild California condor chick to ever be observed by the general public using a live-stream was hatched in another cave in the Hopper Mountain National Wildlife Refuge in 2015. That chick’s live-stream quickly attracted hundreds of thousands of fascinated viewers from all around the world.

“With this live stream, the public can share in the thrill of seeing these rare and highly endangered birds care for their chick, and follow its development before it takes its first flight,” Dr. Sandhaus added. “What was once only seen by a few scientists is now available to anyone with an Internet connection.”

The 2018 nesting season was particularly successful. It had a record-breaking number of 12 active nests in caves in the the mountains of Ventura, Santa Barbara, and Kern counties. Ultimately, six of those nests successfully fledged a juvenile condor, the most ever for the Southern California flock. Yet despite last year’s “baby boom”, the California condor remains one of the rarest birds in the world.

“The success of last year’s nesting season was really monumental for the condor recovery program and a testament to the hard work of all the partners involved in this effort,” Nicole Weprin, a wildlife biologist and Field Work Coordinator with the US Fish and Wildlife Service’s California Condor Recovery Program, said in an emailed press release.

“We’re hopeful for another successful nesting season this year and thrilled that the public can share in our excitement by watching the Condor Cam,” Ms. Weprin added.

California condors, Gymnogyps californianus, are nearly all black except for a distinctive white triangle under their wings, and a bare head that ranges in color from grey (juveniles) to orange (breeding adults). They have the largest wingspan of any terrestrial bird in North America, reaching 2.9-3.0 meters (9.5-10 feet) from wingtip to wingtip. They are so large that they are often mistaken for an airplane when seen from a distance. Due to their lack of a sternum where large flight muscles that are necessary for powered flapping flight to attach, these birds are limited to soaring on thermals. But they are very efficient soaring birds: Condors can fly for 250 km (160 miles) each day in search of their next meal of carrion.

Condors make a living by scavenging large dead animals, such as deer, elk, cattle, horses, bears, and whales that wash up on the beach. The birds once ranged over much of the continental United States and Mexico, and as far north as the western reaches of Canada (more here).

But by the time Lewis and Clarke explored the western United States, this species’ range had shrunk to the sparsely inhabited western portion of the United States (Figure 1). After World War II, the birds’ ongoing population decline suddenly accelerated. By 1982, there were only 22 condors alive on the planet, and a controversial captive-breeding program was initiated to save this critically endangered species from imminent extinction. The recovery program was initiated in 1996, when six captive-bred birds were released into the wilds of Arizona.

Thanks to intensive and creative conservation efforts, there are roughly 490 California condors alive today, more than half of which are once again flying free. Despite this success, California condors are still endangered, and every chick is critically important to the survival of the species.

Lead poisoning from ingestion of lead bullet fragments in carcasses remains the most common killer of California condors. Currently, alternatives to lead bullets are available, and these are being increasingly adopted by hunters who are concerned about the future of wildlife because the evidence shows that lead bullets are poisoning and killing raptors, scavengers and other wildlife in unprecedented numbers, and it’s also harming people and their pets. In fact, lead ammunition is the main reason that California condors almost went extinct.

The chicks are most often killed when their parents feed them bite-sized pieces of trash, such as nuts, bolts, bits of plastic, bottle caps and spent ammunition cartridges. The reason for this curious habit is not known, although scientists suspect that the adults are mistaking human trash for pieces of bone or seashells that provides the rapidly-growing chicks with much-needed calcium.

Currently, conservation biologists are focused on creating two geographically distinct self-sustaining populations of California condors. The plan is for each free-flying population to number around 150 birds with at least 15 breeding pairs in each, and a third population of captive breeding condors. In addition to captive-breeding and reintroduction of condors to the wild, and actively managing wild birds to increase the number of wild-fledged chicks, authorities are working towards reducing the threat of lead poisoning.

This live-streaming condor cam is the result of the collaborative efforts, expertise and funding provided by a number of federal and state agencies, private land owners and organizations. Financial and technical support for the Condor Cam was provided by the U.S. Fish and Wildlife Service, Santa Barbara Zoo, Cornell Lab of Ornithology, Western Foundation of Vertebrate Zoology, Disney Conservation Fund and the Friends of California Condors Wild and Free.

“The condor cams are unlike any other offering on the Internet. Each year we’ve streamed from a different site and pair, and the differences among all these nests and individuals have given viewers a unique opportunity to understand more of the richness and variability of the condor’s life history,” Charles Eldermire, Cornell Lab Bird Cams project leader, said in an emailed press release.

“That’s not just good for viewers — it’s good for the condors, too.”