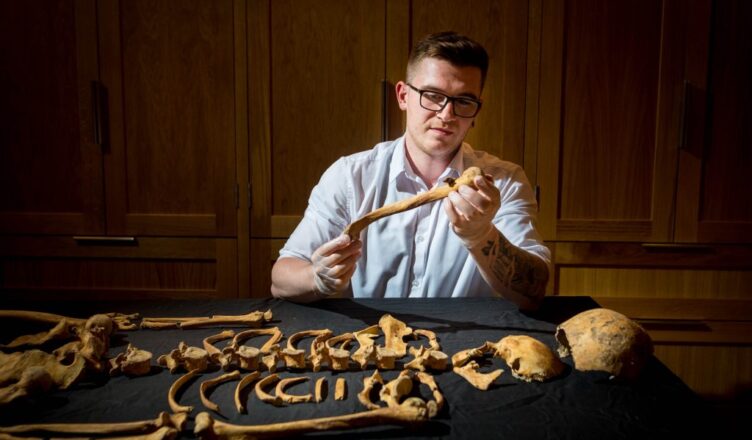 The skeletons of a woman and child have been discovered at London’s famous 1,000-year-old royal fortress and prison, the Tower of London. But while the Tower is notorious for imprisonments, torture and execution, the two skeletons are thought to have been “ordinary people” who lived and worked in the Tower during the late medieval and early Tudor era.

Today, the Tower of London is a UNESCO World Heritage site that attracts more than three million visitors a year who come so see the place where thousands of bloody tortures and executions occurred, with Henry VIII’s wives Anne Boleyn and Catherine Howard being among the most famous.

Scientific analysis of the two bodies identified that one was a 35 – 45-year-old woman and the other was a seven-year-old child and they had been buried between 1450 and 1550 AD, at a time when the Wars of the Roses was raging between the reign of Edward VI the son of Henry V, with Henry VI being murdered there on the night of 21 May AD 1471.

An article about the discovery of the two skeletons in The Telegraph interviews Alfred Hawkins, a curator of Historic Royal Palaces, which oversees the Tower, and he said that while no sign of axe wounds were found on either of the two bodies, tests determined that they were both malnourished and that the woman had suffered chronic back pain.

Further more, Mr Hawkins said the find was exciting because so often scientists get carried away with the prison and the traitors who are buried there, but he points out that the Tower is “not just a palace, a fortress and a prison” but also the home of people who worked and lived there over 1,000 years enabling the Tower to function. And the curator added “We so often miss that human element.”

The two bodies were removed from beneath a medieval floor located outside the Chapel Royal of St Peter ad Vincula where Tower prisoners including “traitors” were beheaded on the nearby Tower Hill.

It was here that in 1876 archaeologists found almost 1,700 bodies but quickly reinterred them in the crypt without assessing them because the building had become so unstable.

Today the Chapel is no more stable, which is why modern archaeologists only excavated the area in an attempt to improve disabled access into the chapel.

Mr Hawkins said that they never even considered testing the bodies with the greater aim of archaeology being to “leave as much of the site intact as possible.”

It was known that the site had a chapel upon it for about 1,000 years and a 1824 plan illustrates a storage shed over the excavation area. A team from Pre-Construct Archaeology discovered a thick mortar surface about 30cm down which they think might be associated with Edward I’s chapel which was built in the 1280s and later burned down in 1512 AD.

If they are right, and this surface is indeed related to Edward I’s chapel, Mr Hawkins said this would be “tremendously exciting” for up to now it was believed to have been situated in the north of our current chapel, not in the south west.

Returning to the woman and child; while their coffins had almost completely degraded, their nails were found to be intact and it was a tiny corrosive mark found on a pin that suggested to the archaeologists that the child had been wrapped in a shroud.

Attempting to answer “who” the two people were, the researchers believe that they might have been linked with the Tower of London’s Royal Mint, the Royal Armouries or maybe associated with securing the Crown Jewels.

After being studied, the two bodies were returned to a crypt and resealed in a special ceremony.