Archaeologists in Peru have discovered the 4,500-year-old mummy of a woman buried near one of the most ancient cities of the Americas.

Dr Ruth Shady Solís said the mummy was probably a noblewoman who died aged 40 to 50 years old and was buried in the coastal ruins of Aspero, about 14 miles away from Caral, a city with some of the most ancient pyramids in the Americas. Both sites stand about three hours north of the modern capital of Lima. 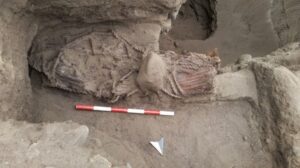 The mummy as buried with carved objects of monkeys and birds, which Shady Solís said suggested possible trade between the coastal town and Caral, a larger inland city.

Shady Solís deduced the woman’s social status from the value and diverse origins of the objects around her: seashells, carved desert birds and designs of jungle monkeys.

Shady Solís’s team has dated the mummy to about 2,500BC, around the same time that people of the region began building pyramids, but has not offered a theory as to the woman’s death.

“In the settlements of the Caral civilization,” she said, “sacrifice of human beings was not regular. They were very rare.”

She also suggested to the Andina news agency that the objects revealed “gender equality, a kind that let both women and men hold leadership roles and achieve a high social status”. 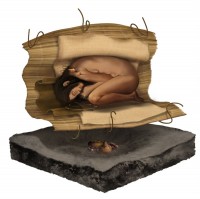 “The place in which she was buried and the form of interment show the high social status that this person achieved about 4,500 years ago.”

The woman was found with a necklace of seashells, a Spondylus pendant, and four “tupus”, or bone brooches carved with designs of birds and monkeys.

Shady Solís also argued that music was an important part of life in these ancient cities, citing the recent discovery of four bone flutes found in the nearby excavation of Supe Puerto, to the north, and 32 flutes in Caral.

Similarities between the instruments and their apparent origins from around Peru, Shady Solís argued, suggest trade in items and culture between cities of the Andes.

Although ancient Americans raised pyramids and cities around the same time that the Egyptians built the monuments of Giza, far less is known about the people of Norte Chico, as the ancient societies of arid northern Peru have become known, than their African counterparts.

It is not a question of scale: Caral has six “monumental platforms mounds” (better known as pyramids), three sunken circular courts and large, hive-like structures thought to be homes for upper, middle and low-class people. All suggest a complex society that could be organized to create huge city projects.

But archaeologists disagree about the origins and nature of this part of ancient America. Shady Solís posits that Caral and inland cities grew out of fishing communities like Aspero, while archaeologists such as Jonathan Haas, a curator emeritus at the Field Museum in Chicago, argue that the settlements came from valleys.

Haas also said evidence does not support the idea that Caral stood at the centre of an ancient American empire.

Haas declined to comment on unpublished findings but noted that there are “equally large and monumental sites” in nearby valleys and that there is no empirical evidence so far that binds some 30 ancient settlements to any central power.

Instead, he argued that the cities were part of a decentralized community that shared its culture, and which – like the Egyptians a world away – relied on canals and irrigation to grow corn and other foods. 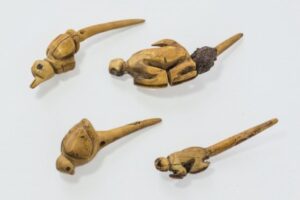 The people of Norte Chico “borrowed” this technology of agriculture, he said, but “we’re definitely the inventors” of their own kinds of governance, “ceremonial architecture and monumental constructions”.