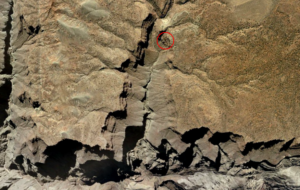 A group of hikers who had been exploring a virtually untouched area of the Grand Canyon happened upon an opening in the side of the canyon wall last July. Peter Marlington and his friends had discovered the entrance to an underground complex that has been estimated to be over four hundred years old and built in the late 1500s.

“It was hot as hell out and we were hiking up the side of the cliff to get into a wooded area for the shade.” Peter Marlington explained. “When we reached the shrub line we felt a cool breeze coming from the high weeds that were growing on the side of the cliff.  It seemed very odd that a cool breeze would be coming from nowhere like that,  so we poked around to see why.

When we pushed our way past the shrubbery we came to the entrance of a large brick-lined tunnel. We could tell right away that it was very old, but we had no idea that it would turn out to be as old as they say it is.”

“We were a little hesitant at first to go inside because we didn’t know what it was.  We thought it might be a flood tunnel and we could be drowned in a sudden storm came up.   And it was really kind of creepy too.   I don’t believe in ghosts, but I’ll tell you when you are staring into an old dark musty smelling tunnel like that, it will give anyone the creeps.  After a few minutes of debating whether or not we should go inside,  the spirit of exploration overruled our fears, out came our flashlights, and into the tunnel, we went.

It went for quite a distance all on very level ground. We knew that if it was a flood tunnel that it would be slopped upward, we were relieved when we realized that we weren’t going to be flushed out in a sudden deluge.  After a few hundred feet the tunnel stopped, it was boarded up.”
The National Reporter – Did you turn back?

“Oh, hell no.   We broke through.  We had to.  If we quit just because of some old rotten wood blocking our way and turned around,  we would have spent the rest of our lives going crazy wondering what was on the other side of that door.”

The National Reporter – I can understand that.  As a staff member of   The National Reporter, I would have continued on as well to satisfy my curiosity and to bring yet another award-winning news story to my readers.  So, What was on the other side of the wooden barricade?
“Another tunnel.  It was a lot smaller than the one we were in, it was more like a doorway in the wall.   It was pitch black inside and it smelled kind of funny, like something that has been dead for real long time, you know, like dried up and dusty smelling.   We made our way inside and soon came to another tunnel that went off to the right and another one about twenty feet ahead that went to the left.

We didn’t go down either of them, we just kept going straight.”

“We continued down the pitch-black tunnel until we came to a huge chamber.  Our flashlights were barely bright enough to light the entire area up because of its immense size.   Down below the brick floor looked like it had collapsed and there appeared to be some sort of tunnel system that had been exposed.  We had no idea what the tunnels were for, but they were definitely big enough for large groups of people to move through.”

The National Reporter Did you go down to see what was inside of them?
“We did after a while.   The other guys were getting kind of scared, I have to admit it was getting kind of creepy.   Graveyard creepy,..you know what I mean?”

The National Reporter – I know exactly what you mean. “I went down by myself, the other guys were too scared.   It took a few minutes to get down to the collapsed floor where the tunnels were.  It was pretty dangerous because the morter was all crumbled and powdery and the bricks were loose.    I figured that was why the floor had collapsed.   I entered the tunnel on the far left and walked for about fifty feet,  then it stopped at a bricked-up wall.  There was a loose brick in it, so I pushed on it and jiggled it around until it fell into the room on the other side.”

The National Reporter – What was inside of the room?

“I don’t know, I couldn’t see.  “The hole wasn’t big enough to stick the flashlight in and look in at the same time, so I just put the camera into the hole and snapped a few pictures.  I had the weirdest feeling while I was doing it like there was something on the other side of the wall watching me the whole time. I’ll tell you this much, it spooked the hell out of me and I ran out of there with the hair standing up on my neck.”

The National Reporter – What did you do then?

“We left.” He said. “When I told my buddy’s that it felt like something was watching me from the other side of that wall, that was it.  We ran out of that place so fast nothing could have stopped us.” The National Reporter – What did you do when you exited the complex, Did you report finding it right away?

“Yeah, pretty much.   We went to the park rangers’ office and told them what we found.  Naturally, they didn’t know what we were talking about.  They checked their map and there were no tunnels or underground facilities in that area.  They thought we were making the whole thing up.”
The National Reporter – What did you do then?

“We took them out to the tunnel so they could see it for themselves.  They didn’t want to go at first because they still thought we were on something.  I guess I would have thought the same thing if I was in their position.  The whole thing sounds so made up.”

The National Reporter – I can understand that most people would think that you made this story up.  It’s a good thing you have photographs to prove it’s all true.  Your photographs coupled with the integrity and reputation of  The National Reporter as being one of the most reliable news sources in the nation is guaranteed to make believers out of many skeptics.

“It blew our minds.   I mean,..who the hell built it?   The Indians sure as hell didn’t have the know-how to build something like that and there were no European settlers that far west at the time and even if there was, they sure as hell didn’t have the equipment to dig out an underground complex of that size and manufacture the millions of bricks it took to build it.”

The National Reporter – The complex was to be opened to the general public after your discovery, but those plans were quickly cancelled when a government agency closed it down suddenly for some unknown reason. Do you have any ideas on why they did that?

“I have my suspicions.   Remember when I told you about how I stuck my camera into the hole in the wall and snapped a few photo’s and it felt as though something was watching me?”

The National Reporter – Yes, was there something in the photographs?
“Take a look for yourself.” He said, handing it to me. “If this is 400 years old, then something really weird was going on back then that people don’t know about and they sure as hell aren’t going to find out what it was from reading their history books, I’ll tell you that.”

I took the photograph from him and to tell you the truth, I was speechless by what I saw. I could understand what Peter Marlington meant when he said something weird was going on back then. I won’t say anymore, I will just present you, readers, with the image Mr. Marlington captured on film and leave you to ponder on it.