15,000-year-old ear infections discovered in burials from the Levant

Researchers from Tel Aviv University have identified ear infections of the remains of people living in the Levant about 15,000 years ago in the skull.

The principal author, Dr. Hila May of the Department of Anatomy and Anthropology, TAU Sackler Faculty of Medicine and the Dan David Center for Human Evolution and Center for Biohistory Studies at Steinhardt Museum of Natural History, stated: “We seek to determine the impact of our environment on illness throughout different periods.”

“We have been able to detect signs in our middle ear of prolonged inflammation by advanced technologies and special techniques developed in our laboratory.” 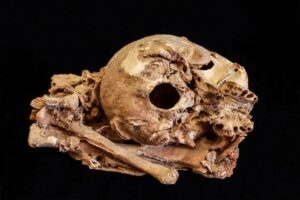 The researchers found a decline in morbidity as a result of ear infections following the transition from hunting and gathering to farming on account of changes in living conditions. A peak in morbidity, however, was observed in a sedentary population living about 6,000 years ago (Chalcolithic period).

Dr. May says the reason for this is twofold: social and environmental: “We know from archaeological excavations of this period, similar to preceding periods, people lived in a communal area where all activities, from cooking to raising livestock, took place.

As a result, the population density in the ‘home’ was high, hygiene was poor and they suffered from indoor air pollution. Two other factors are known about this period – dietary change, the advent of dairy consumption, and climate change, a dip in temperature and a rise in rainfall, also contributed to the prevalence of ear infections.”

A story in the skulls

Until the advent of antibiotics in the 20th century, ear infections developed into chronic conditions, or, due to complications, caused permanent loss of hearing or even death.

“Ear infections are still a very common childhood ailment, with over 50 percent of young children today still suffering from an ear infection at one point or another,” explains Dr. May.