San Francisco was built on the site of sunken ships abandoned during the Gold Rush.

Here is another weird part of history that we will love. A large part of downtown San Francisco was built on the site of sunken ships abandoned during the Gold Rush.

The Gold Rush of 1849 and 1850 did not include railroads, automobiles, or aircraft. The easiest and fastest way to get to the gold fields was to travel by boat. During the summer of 1850, records show there were more than 500 boats anchored in the area surrounding Yerba Buena Cove. 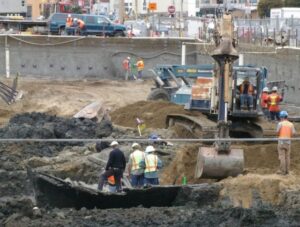 After the ships had reached, crews and passengers abandoned them to make their way to the gold fields to find their fortunes. Many of the boats ended up being left to rot where they were docked.

Other boats were converted to other uses, such as jails, storeships, hotels, and even saloons.

Some of the boats were sunk on purpose so they could secure water lot titles, which was property that was originally located under water. Because of the fires that struck the city and the increasing need for materials to build with, many of the vessels were destroyed and broken up for their timber, metal plating, and any other reusable parts.

Most of the crews of San Francisco harbor deserted their vessels to join in the Gold Rush.

This could have left as few as five people to unload the large ship. At that point, the ship’s log ends on July 12, 1849. With no crew to sail the ship and with more ships arriving in the harbor each day, the Niantic’s officers were sent instructions by her owners through an agent to sell the ship.  During high tide, she was floated into shallow water with oil barrels on her side for extra buoyancy.

She was taken offshore to the intersections of Montogomery and Clay streets. After being put aground, she was converted for multiple uses ranging from warehouse to store to offices and then to hotel.

With the harbor being blocked up with empty ships and a downtown business area that was growing too fast needing room to expand, townspeople decided they needed to take matters into their own hands.They took the abandoned ships and found other uses.

To fill the cove, many of the ships were sunk.  A seawall, running roughly along the path, was all the remained of the cove by the late 1860s.  Throughout the years, developers have excavated sites for new buildings and demolished old structures. When they were doing this, they’ve uncovered the remains of multiple Gold Rush ships.

As San Francisco built the BART subway system in the 1960s, it was a regular occurrence to uncover ships and ship fragments.

In more recent years, specifically 1994, construction workers who were digging a tunnel found a 200-foot-long ship located 35 feet underground. They tunneled through the ship because that was less expensive and not as dangerous as going around it.

If a buried ship is found, it is often looted of coins, bottles, and antiques that were left inside. These abandoned ships have been found to hold sealed bottles of whiskey and champagne, personal effects, and nautical equipment.

Numerous ships that haven’t been uncovered still remain under the city.