Controversially, Adam’s Calendar is the oldest human-made device in the world. Often known as “African Stonehenge,” it predates Giza’s Great Pyramid as well as Stonehenge by decades and thousands. Located in Mpumalanga, South Africa it is a standing stone circle about 30 meters in diameter and has been estimated by some accounts to be more than 75,000 years old.

Many astronomical lines have been found at the site and this is perhaps the only example of an fully functioning megalithic stone calendar in the world , largely intact.

Thousands of stone ruins are found in the mountains of South Africa. In 1891 the English explorer Theodore Bent made the first estimation of the number of such ruins. He estimated the number in this part of the world was around 4,000.

By 1974, it had been estimated at 20,000. Today, Michael Tellinger, a scholar and expert, has estimated that the number of ancient stone ruins is 100,000 or perhaps even higher. Some of these “stone circles” have no doors or entrances while most are connected by an expansive network of channels that are often misinterpreted as “roads” by some historians.

This linked grid of circular ruins is embedded in a nearly infinite field of old farming terraces circling the structures. Adam’s Calendar is considered among such ruins to be the most famous.

Known by African elders, as the “The Birthplace of The Sun” or “Inzalo y’Langa”, the site was first brought to public attention in 2003 by South African pilot Johan Heine.  He had been flying over the mountains of Mpumalanga, South Africa for over 20 years and took an interest in the thousands of strange circular stone objects scattered throughout the region and began photographing them.

In consulting experts on their origins, he was informed that they were the remains of “cattle kraal” (livestock enclosure) left behind by the Bantu people when they migrated from the north around the 14th century.  Today this theory seems far from definitive as the structures are unlike any other Bantu cattle-kraal designs, which are usually made of thorny shrubs, with a single entrance/exit for the cattle.  There are also several thousand of them spread over tens of thousands of miles. 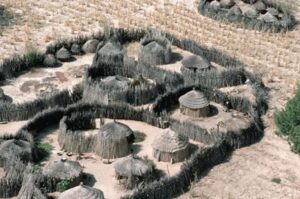 An air crash involving one of his crew brought Johan to discover the mysterious monolithic circle by accident.  On route to find one of his pilots who crashed his plane on the edge of the cliff, Johan noticed an arrangement of large stones sticking out of the ground next to the crash site.

While rescuing the injured pilot down the side of the cliff, Johan walked over to the monoliths and realized they were aligned to the cardinal points – north, south, east and west – as well as the equinoxes and solstices.  There were at least 3 monoliths aligned towards the sunrise, but on the west side of the aligned monoliths there was a strange hole in the ground.  After weeks and months of measuring and making observations, Johan suspected it was a stone calendar.

The site is aptly named Adam’s Calendar because the stones are placed to track the movement of the sun, which casts shadows on the rock.  It still works perfectly as a calendar today by following the shadow of the setting sun, which is cast by the taller central monolith onto the flat stone beside it.

This remarkable calendar was originally a large circular stone structure resembling Stonehenge and in the center of the ‘circle’ are two upright stones which are said to have been carved.  Its original shape is still clearly visible from satellite images.  The stones are all dolomite, weighing up to 5 tons each, and are said to have been transported from a distant site.

It should be noted that the area surrounding Adam’s Calendar is extremely rich in gold.  Several mining shafts have been reported in the area with one of the richest working mines in the world today being the Sheba Gold Mine, located in Mpumalanga.  Not only did the rich gold reefs attract attention in the 1880’s, but the early evidence of historic civilizations mining for minerals were described in writings by the early Europeans.

The first calculations of the age of the calendar were made based on the rise of Orion, a constellation known for its three bright stars forming the “belt” of the mythical hunter.  The Earth wobbles on its axis, so the stars and constellations change their angle of presentation in the night sky on a cyclical basis.  This rotation, called the precession completes a cycle about every 26,000 years.

By determining when the three stars of Orion’s belt were positioned flat (horizontal) against the horizon, it is possible to estimate the time when the three stones in the calendar were in alignment with these stars.  According to Tellinger, a calculation done by astronomer Bill Hollenbach based on the rise of Orion suggested an age of the site of at least 75,000 years.

A further calculation done in June 2009, suggested an age of at least 160,000 years, based on the rise of Orion ‘flat on the horizon’ but also on the ‘erosion of dolerite stones’ found at the site. Some pieces of the marker stones had been broken off and sat on the ground, exposed to natural erosion.  When the pieces were put back together about 3 cm of stone had already been worn away. These calculation helped assess the age of the site by calculating the erosion rate of the dolerite.

There is still much about Adam’s calendar that is yet to be understood, including who built them, what their civilization was like, and how they constructed it with such precise measurements. Perhaps in time, more research will piece together this prehistoric mystery.