Tang Dynasty noblewoman buried with her donkeys, for the love of polo

Scientists discovered the first evidence that nobles in imperial China played donkey polo, in the tomb of a rich, influential woman who died in Sian more than 2,000 years ago.

The lady, called Cui Shi, was buried with   donkeys, probably so she could keep playing donkey polo in the afterlife, researchers reported in a new study. 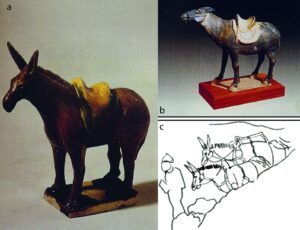 Cui Shi ‘s tomb had been ransacked until its discovery, and looters robbed it of much of the burial items. Yet they left behind the remains of animals that were buried with her, which included donkeys.

The donkeys’ existence in an elite woman’s tomb indicates that they were much more important than lowly pack animals, and may have been the donkeys that Cui Shi rode during polo matches, the scientists wrote in the report.

For thousands of years, people have used donkeys (Equus asinus) as beasts of burden, while horses were more commonly prized for their speed, agility and beauty.

But the ancestor of domesticated donkeys, the African wild ass (Equus africanus), is also beautiful, graceful “and very fast,” said study co-author Fiona Marshall, a professor in the Department of Anthropology at Washington University in St. Louis. 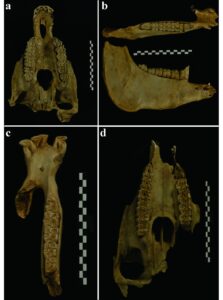 It’s therefore not surprising that the wild ass’s donkey descendants would be considered good choices for playing polo, even if donkey breeding selected for slower and steadier animals than wild asses, said Marshall.

And unlike horses, donkey’s wild relatives are solitary animals. This makes them more independent and less likely to spook and run away when startled, as horses often do, Marshall explained.

“They’re very sensible. They make decisions about danger and they don’t have a strong flight response,they won’t bolt with you,”Marshall said.

This trait would have made donkeys a safer option than horses for polo games, which were popular during that time in imperial China, but could also be quite dangerous — Cui Shi’s husband is known to have lost an eye during a polo match, Marshall added.

A number of accounts from the Tang Dynasty (A.D. 618 to 907) even suggested that nobles would use polo matches as opportunities to murder their enemies, by tripping up a player’s horse and then galloping over the rider when he fell, Marshall said.

“If you wanted to be a bit safer, it would make sense to play on donkeys,” she said.

Cui Shi’s donkeys were sacrificed and placed in the tomb at the time of her death, in A.D. 878; a carved epitaph in the chamber described who she was, and analysis of the animal skeletons revealed that the beasts were small donkeys that had been well-fed, “with access to domestic grains,” the study authors reported.

When the tomb was first discovered in 2012, it was thought that the donkeys were pack animals. But when scientists examined the donkeys’ bones for the new study, they found that not only were the donkeys smaller than average, the shafts of their leg bones were thicker than was typical in donkeys, suggesting that the animals had a different type of gait than donkeys bred for carrying heavy loads at a slow and steady pace.

This provided the researchers with another piece of evidence that the donkeys were ridden during polo matches, in which animals must quickly stop, start and change direction at high speeds.

“Given the importance of polo in that time and place — and in her family — and the unusual locomotion of these donkeys, we came to conclude that they were very likely used for polo,” Marshall said.