Archeologists in Poland were shocked to find the bones of the Scandinavian people, rather than the early Piast elite, discovered in a medieval graveyard in the village of Cieplo, East Pomerano, Poland.

The burials were found in the middle of the graveyard by the first king of Poland, Bolesław I the Brave (b.967 – d.1025). These are the oldest of the 60 + graves which so far have been discovered and differentiate themselves by their high quality and bad products. 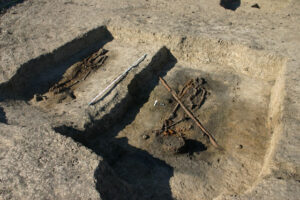 The remains were found with substantial weapons and supplies that indicated that the dead were warriors. The swords, spears and spearheads were beautifully adorned with full collections of horse tacks (spurs, stirrups, pieces and buckles). The tombs also contain coins, pebs, a set of scales with weights, metal and wood utensils.

The graves would have been special in their own right even if they had not been so full of funerary goods. They are chamber graves, which are very rare in the archaeological record of medieval Poland.

Two were made of horizontal logs attached to the cog joints in pairs, and two were made of vertical piles in the corner. The pile tombs contained massive sarcophagi, the largest ever found in Poland.

All four of the burials were oriented along the North-South axis, another unusual feature in Polish graves from this period. The group of burials was surrounded by a fence or palisade and was never interfered with, suggesting the locals remembered and respected the deceased.

The cemetery was excavated between 2004 and 2014, and the four central burials generated much discussion between archaeologists and historians. 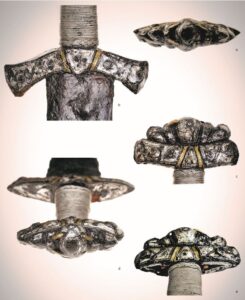 There was debate over who the deceased had been, where they came from, whether they were Piast elite or possibly from Scandinavia or Western Europe where chamber graves from this period are well known.

Now researchers have answered this question thanks to stable isotope and DNA analysis of bone samples from the remains. The four were indeed from Scandinavia, likely Denmark.

According to Dr. Wadyl, settlements in the area of Ciepłe were founded by Bolesław I the Brave. For the growing early Piast state, the settle-ment of people was one of the means to gain control and sovereignty over the eastern part of Pomerania and the extremely important and prospective Vistula route.

“The deceased buried in the central part of the cemetery represented the then social elites, as evidenced by the monumental structure of their graves and rich equipment. They probably belonged to a group of elite riders, but their role was probably not limited to the function of warriors,” Dr. Wadyl said.

Dr Wadyl believes that they collected taxes from the local population for the benefit of the Polish ruler. “This is indicated by scales with sets of weights found with two of the dead buried in chamber graves, and with the other two – touchstones used for assaying precious metal alloys, at the same time, indicating access to these metals and partici-pation in trade,” he added.