In an ancient Greek cemetery at least 80 skeletons lay in a mass grave with handles clamped by iron shackles.

They are the victims of a mass execution, say archaeologists, but who they were, how they got there and why they seem to have been buried with a measure of respect — that all remains a mystery.

They were found earlier in part of the necropolis of the Falyron Delta — a large ancient cemetery unearthed during the building of a national opera house and library between Athens downtown and Piraeus port.

There were few people who could get in to have a close look.

But on a brief site tour,archeologists examined the skeleton cautiously some lying in a long, tidy row in the dug-out sandy ground, some leaning on top of each other, bent arms and legs with their jaws hanging open.

“They have been executed, all in the same manner. But they have been buried with respect,” Dr. Stella Chryssoulaki,head of excavations, said.

“They ‘re all tied with handcuffs at the hands and most of them are very very young and in a very good state of health when they were executed.”

The experts hope DNA testing and research by anthropologists will uncover exactly how the rows of people died. Whatever happened was violent — most had their arms bound above their heads, the wrists tied together.

But the orderly way they have been buried suggest these were more than slaves or common criminals. 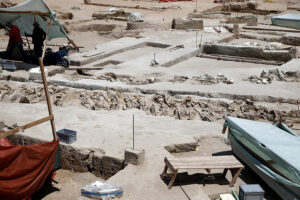 The cemetery dates from between the 8th and 5th century B.C. “It is a period of great unrest for Athenian society, a period where aristocrats, nobles, are battling with each other for power,” said Chryssoulaki.

One of the strongest theories is that they were supporters of Cylon, an Athenian noble and Olympic champion who staged an attempted coup in Athens in 632 B.C. with the help of his father-in-law, the tyrant of Megara.

The coup failed and Cylon hid in a temple of the Acropolis. He      managed to escape, but the people who backed him were killed.

“Perhaps with the DNA tests that we will do on these skeletons we may confirm or not this hypothesis that these deceased, these young people could be …. part of a coup …. an attempt by a noble to take power by force,” said Chryssoulaki. 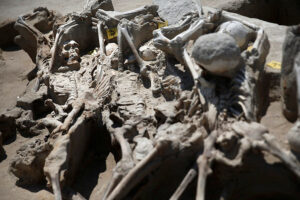 More than 1,500 bodies lie in the whole cemetery, some infants laid to rest in ceramic pots, other adults burned on funeral pyres or buried in stone coffins. One casket is made from a wooden boat.

Unlike Athens’ renowned ancient Kerameikos cemetery, the last resting place of many prominent ancient Greeks, these appear to be the inhabitants of regular neighborhoods.

The dig is within a 170,000- sq.-meter landscaped park, shadowed by the vast new modern library and opera house buildings being built by the Stavros Niarchos philanthropic foundation.

High-rise apartments dot the skyline to the north while a noisy expressway snakes by the site’s east side.

Chryssoulaki wants to see a museum built on the spot, as monument   to the daily lives of Athenians from another era.

“A cemetery is a first and last photograph in antiquity of those people that pass from life to death,” she said.