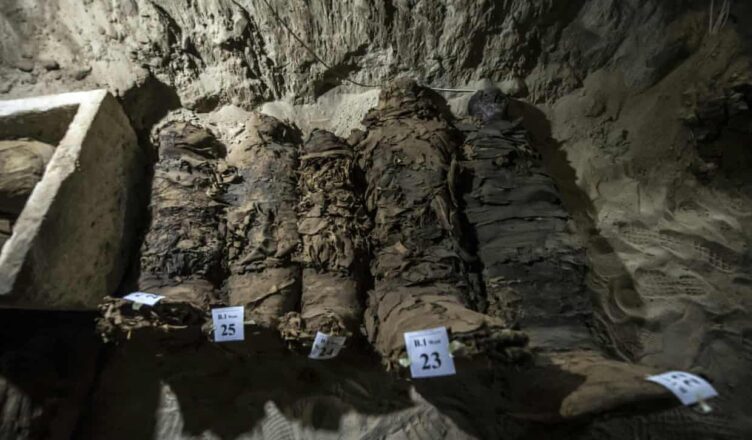 Egypt’s ministry of antiquities said it discovered a necropolis near the southern city of Minya with as many as 30 intact mummies.

The discovery was made in Tuna al-Gabal, a vast archeological site on the western edge of the desert. The area is mainly necropolised for birds and animals.

Archeologists believe that a cemetery with this number of mummies for ordinary people were found for the first time in the form of catacombs. Inside the catacomb, Khaled Anani, Egypt’s Minister of Antiquity, spoke of “The more we search, the more we notice,” the openings in the catacombs.

The archeologist had keys to the grave. Four eight meter deep wells have been dislodged, leading to catacombs in which mummies of men, women and children are well-formed.

In one chamber inside the tunnels, human bones and skulls are piled. Most of the mummies were laid in lines in both of its sides. While some of them were left in plain stone and wooden sarcophagi, others were piled on top of each other.

“The dig hasn’t finished yet, it’s in the beginning,but archeologists expected to find more.

Egyptologist Salah al-Kholi told a news conference held near the desert site that the discovery was “the first human necropolis found in central Egypt with so many mummies”.The discovery was “important, unprecedented,” Mohamed Hamza, director of excavations for Cairo University said. The site is close to an ancient animal cemetery.

It was the second discovery of mummies announced with much  fanfare by the government in less than a month. The ministry invited reporters to the southern city of Luxor to unveil eight mummies discovered in a 3,500-year-old tomb belonging to a nobleman.

For the cash-strapped Egyptian government, the discoveries are a boon from the country’s glorious past as it struggles to attract tourists scared off by a series of Islamist militant attacks.

“Antiquities are the soft power that distinguishes Egypt,” Enany said. “News of antiquities are the things that attract the world to Egypt.” Millions of tourists visited Egypt every year to see its Giza Pyramids – the only surviving monument of the Seven Wonders of the Ancient World – and its ancient pharaonic temples and relics.

But a popular uprising in 2011 that overthrew veteran strongman Hosni Mubarak ushered in years of unrest that battered the economy and drove away tourists.

Egypt is trying to send a message that its heritage sites are safe, despite terrorist attacks elsewhere in the country.

Mr Anani said that he wanted to send the message that while monuments are looted and destroyed in other Middle Eastern countries, Egypt is restoring and excavating its heritage.

“I believe and trust that the most interesting things, which will bring the entire world’s attention to Egypt and improve its image are any news related to antiquities.