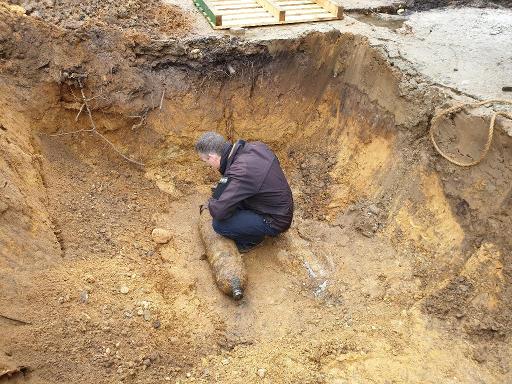 Police cordoned off one of the busiest areas of central London on Monday after what’s thought to be an unexploded World War II bomb was dug up at a construction site.

An area covering several blocks of the tightly packed neighborhood was cordoned off while police assessed the device.

The German air force dropped thousands of bombs on the British capital during the war, killing tens of thousands of people. Bombs left over from the conflict are still occasionally uncovered during construction work.

Police had initially lifted the cordon in Soho but blocked part of the area off again on Tuesday.

Soho’s Dean Street was blocked off and workers were told to leave their offices again following the discovery on Tuesday.

Construction workers first came across the bomb near the Soho Hotel on Monday, prompting a sizable portion of the neighborhood to be shut down by police and hundreds of people to be evacuated.

“Another part of yesterday’s WW2 ordnance has been discovered,” police tweeted Tuesday afternoon.

The cordon had previously been lifted, but the second discovery prompted a smaller area to be blocked off once more.

The entrance to the Soho Hotel was among the areas shut down, with dozens of officers and a number of vehicles controlling the perimeter of the cordon.

Soho is a lively part of the UK’s capital, housing a number of businesses, restaurants, and bars.

During the war, German air raids dropped more than 12,000 metric tons of bombs on the British capital and killed nearly 30,000 Londoners, according to the Imperial War Museum. Most of that damage was done during the Blitz between 1940 and 1941.