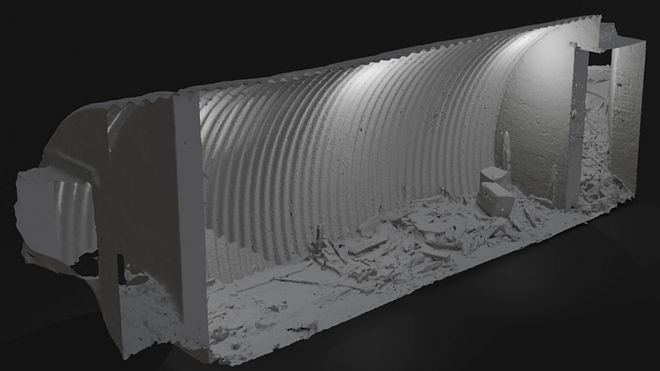 40 Years ago, Kit Rodger and his friends were riding through Scotland’s Craigielands Park, discovered a small underground tunnel.

Apart from featuring in their boyhood adventures, the mysterious bunker remained unknown and was gradually obscured by undergrowth.

A few months ago, Rodger, now a survey technician for Forest and Land Scotland (FLS), returned to the area to check for any heritage sites or environmental attributes that would interfere with an upcoming tree-felling operation.

Without an official record of the bunker, Rodger and his colleague, Kenny Bogle, scoured the forest floor for any signs of it.

“With only vague memories of more than 40 years ago, Kenny and I searched through head-high bracken until we stumbled on a shallow trench which led to the bunker door,” Rodger said in an FLS blog post. “Only a small opening remained, but we could just make out the blast wall in the darkness beyond.”

After an investigation, the FLS determined the bunker was built during World War II to house an Auxiliary Unit, a British citizen militia tasked with sabotaging an invasion if the enemies made it past the first line of defense, the Home Guard.

These highly clandestine units sometimes called “Churchill’s secret army” or “scallywags,” comprised men with a wealth of knowledge about the land—like gamekeepers, foresters, and poachers. Because they were the last resort, they were expected to fight to the death.

And, because Auxiliary Units operated with utmost secrecy, many of their bunkers have never been found. This particular one is about 10 feet by 23 feet and was constructed from riveted, corrugated iron sheets over a cement floor.

FLS archaeologist Matt Ritchie said in a press release that records indicate the bunker was used by about seven men who were armed with revolvers, submachine guns, a sniper’s rifle, and explosives.

The only surviving evidence of the unit’s life underground is some broken wood, which might be the remains of bunk beds. As BBC News reports, the bunker likely also contained a table and a cooking stove.

Though we know the bunker is somewhere near Moffat, a town in Scotland’s Dumfries and Galloway council area, the FLS is keeping its exact location under wraps to protect it from a potential influx of visitors.