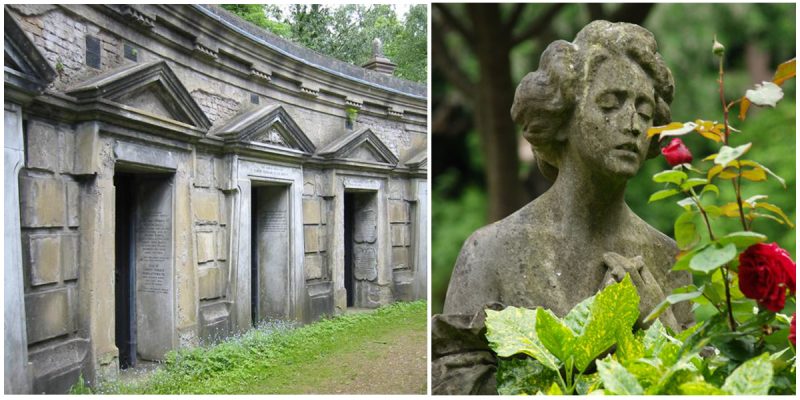 One of the creepiest cemeteries in London, the Highgate Cemetery

“Highgate Cemetery has some of the finest funerary architecture in the country. It is a place of peace and contemplation where a romantic profusion of trees, memorials, and wildlife flourish.”Or so it says on the official website of the cemetery in north London, often referred to as a Victorian Valhalla.

The location of George Michael’s well-guarded grave, Highgate Cemetery is the final resting place for many prominent figures. It was built in 1839, due to the fast increasing mortality rates in Victorian London, as part of the “Magnificent Seven” brand new and privately owned cemeteries aimed to provide that much-needed ground for the deceased, and a dignified way for them to go.

The City of London had seen a rapid inflow of people at the beginning of the 19th century, probably due to the Industrial Revolution and the opportunities that came along.

While the city had a lot of prospects to offer for the living, there wasn’t much space for those who reached the end of their days. Church graveyards were quite full and folks began to bury their loved ones in shallow graves in the backyards of their homes, or on illegal burial sites.

The whole process was not systematically done. And there was the stench. A foul-smelling reek of decomposing corpses that, according to historical accounts, spread through every corner and the city was becoming unbearable. As the ideas behind the miasma theory, that diseases were spread by “bad air,” became generally accepted, this became seen as an unacceptable state of affairs.

At the beginning of the 1830s, Parliament unanimously reached an agreement to built seven new cemeteries around the city as a solution to the rising problem. In 1836 an Act was passed which enabled the formation of the London Cemetery Company (LCC) who were commissioned to build Highgate Cemetery, the capital’s new main burial ground.

The first of the Magnificent Seven, Kensal Green Cemetery, founded by the esteemed English barrister George Frederick Carden in what is today the Royal Borough of Kensington and Chelsea, was a fully functioning graveyard from 1833. The second, West Norwood Cemetery, was consecrated in 1837.

Although these places had grand architecture and were well landscaped, Stephen Geary, the founder of the LCC and an architect with a vision, wanted something even more special for Highgate. He entrusted the task of creating his grand masterpiece to the architect James Bunstone Bunning, and renowned gardener David Ramsey.

The work took almost three years. Ramsey did a marvelous job with the exotic gardens to complement Bunning’s architectural brilliance, evident even to this day. The cemetery was officially opened in devotion to St James by Lord Bishop of London, Reverend Charles James Blomfield, on May 26, 1839.

The first burial, of Elizabeth Jackson of Little Windmill Street, Soho, who was only 36 when she passed away, took place the same day. Shortly after, millionaire Julius Beer raised one impressive mausoleum to his eight-year-old daughter that still stands as the most eye-catching monument in the cemetery after all these years.

In about two decades, Highgate Cemetery saw a huge profit and “housed” over 10,000 individuals. So in addition to the 17 acres of land on which it was first built, the burial ground saw an expansion of 20 additional acres on the other side of Swain Lane, a site now known as the East Cemetery, leaving the original one to be referred to as the West Cemetery.

First to be buried at the new site was Mary-Anne Webster in 1860, and 20 years later German philosopher Karl Max, arguably the most famous name to be read on a gravestone in the whole cemetery, was also buried in this wing. Strangely, only 11 people attended his funeral even though his monument is the most visited. His bust which tops off this monument, after an unsuccessful attempt to blow it off, now slightly leans to the left, just as his ideals.

Highgate’s heyday ended at the turn of the 19th century, The cemetery slowly declined in popularity as folks desire for fancy funerals, elegant parades, and well-dressed mourners waned with the First, and then Second, World Wars. By the mid-50s it had come to be completely neglected, mostly due to people’s increased interest in a cremation, which was a lot cheaper anyway. The place slowly fell into decay.

But as time proved, it was for the best. For where previously there was only death to be found, life entered once again, in the form of large trees, wildflowers, 30 plus different bird species, and small animals (including foxes), as well as a giant rare spider that today haunts the 150-years-old vaults of the Egyptian Avenue, designed by Stephen Geary himself.

In 1975 a group called The Friends of Highgate Cemetery took over the maintenance. They aimed to “promote the  conservation of the cemetery, its monuments, and buildings, flora, and fauna, for the benefit of the public as an environmental amenity.” And soon what was neglected, after some much-needed repair to more than a few memorials and the 37-acre landscape, the place was made into not just a wonderful home for the animals and a distinguished garden for the dead, but into an excellent tourist attraction for the living as well.

It’s a place where visitors can walk freely within the eastern wing and lose themselves its eerie wooded stretches, where long trails fade away into the trees and gravestones peeks out of nowhere. All the time while searching for those buried here and whose life truly meant something to them.

According to Historic UK, there are more than 850 notable people among the 170,000 buried at Highgate. The resting places of 18 Royal Academics, 6 Lord Mayors of London, and 48 Fellows of the Royal Society can be found scattered through the East Cemetery which is open for the public to roam freely, or in the West Cemetery, accessible only as part of a guided tour. Some of them lay buried in the Egyptian Avenue with giant spiders as friends inside their vaults, in the Circle of Lebanon right next to it, or in the separate Gothic Catacombs.

One of those who is particularly close to our hearts “was a dreamer, a thinker, a speculative philosopher… or, as his wife would have it, an idiot.” Douglas Adams, the humorist who wrote The Hitchhiker’s Guide to the Galaxy, and who, to quote him, “may not have gone where I intended to go, but I think I have ended up where I needed to be.” (The Long Dark Tea-Time of the Soul).

He ended up where almost anyone else does, in a grave underground, or in his case at a cemetery perched on a hill above the smoke of London, where everything is peaceful and serene for the living and the nonliving. Well, except for the occasional exploding caskets, and the blood-sucking vampire that allegedly haunts the premise at night.

“Then, after a second or so, nothing continued to happen.”