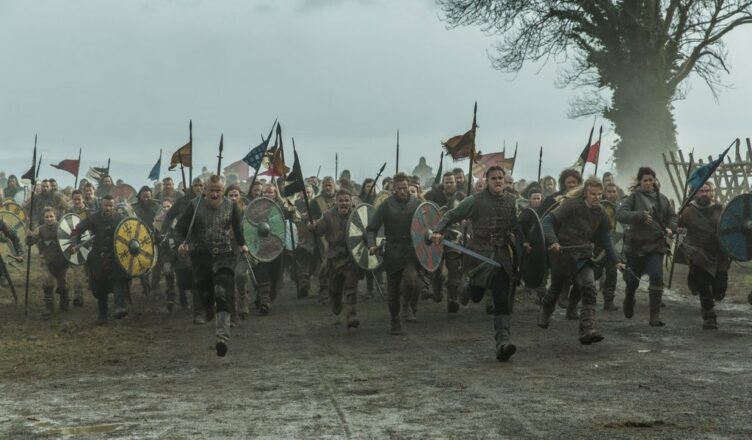 A Viking group of raiders was terrible to the victims. But a Viking army emerging to seek revenge was more catastrophic. The Great Army of the Vikings was once willing to do anything only to see Anglo-Saxon fall.

The Viking Great Army or the Great Heathen Army was the name that the Anglo-Saxons called the coalition of the Viking warriors to tend to invade England during the 9th century.

Some sources we get to know about the Viking Great Army are from the Tales of Ragnar Lothbrok and Ragnar’s Sons. There is archaeological evidence pointing to the existence and great damage the Viking Great Army caused to the Anglo-Saxons. Many questions and theories are still put forward when it comes to this Viking coalition.

Depiction in the Legendary Accounts

However, the Anglo-Saxon Chronicle didn’t mention any reason why the Vikings invaded for such a large scale. But in the Tales of Ragnar’s sons, it was to seek revenge for the dead lord – Ragnar Lothbrok.

In the Viking sagas, Ragnar was carrying on a raiding voyage on Northumbria which was on the reign of King Aella at that time. Then his ship got blown off course.

The group of Ragnar was defeated by that of King Aella and Ragnar was captured. Ragnar was thrown into the pit of vapers which became his final resting place.

“How the little piglets would grunt if they knew how the old boar suffered.” The dying words of Ragnar prophesied the birth of the Viking Great Army. On receiving the news of their father’s death, Ragnar’s sons set out to seek revenge.

It was evident that the depiction of the Viking Great Army varied. The telling of the Anglo-Saxon historians was different from the Viking ones.

According to the Tales of Ragnar’s sons

After the death of Ragnar Lothbrok, the major focus was shifted to Ivar the Boneless who was the disabled son of Ragnar. Ivar founded the town of Jórvík which is York today. He formed a good relationship with the neighboring Anglo-Saxons and built up his military and political power.

According to the Anglo-Saxon Chronicle

However, in the Anglo-Saxon Chronicle, there was no mention as to the Blood Eagle on King Aella. But the chronicle mentioned him to have fallen in the battle against the Great Viking Army at Jórvík.

The way the writers of the Chronicle told the stories was based on the chronological order. After battles with kingdoms in England, the Viking Great Army returned to Jórvík and stayed there for roughly a year.

Questions About the Great Heathen Army

Mysteries are all around whenever it comes to the Great Heathen Army also known as the Viking Great Army.

The Chronicle seemed to depict the Viking Great Army as a group of Viking raiders on a larger scale compared with other Viking raiding groups at the time.

Archaeological evidence shed some light on the Viking Great Army. The archaeologists once announced to the mass media about their discovery of the Viking mass burial in Torksey, Lincolnshire, and Derbyshire. The grave dated back to the end of the 9th century.