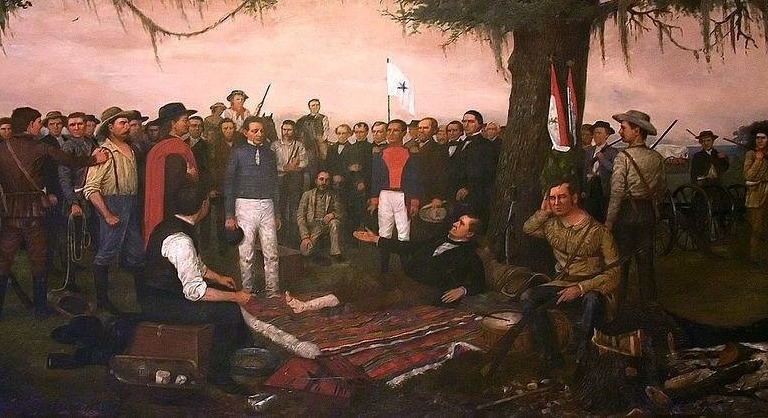 The Mexican General who Fell Asleep and Lost Texas

In history, we are sometimes amazed that many individuals who obtain power or positions of leadership were in many ways incompetent.

George B. McClellan, General of the Union comes to mind. as a brilliant organizer and training officer; McClellan was popular with his men because he kept them out of war and well-fed.

Over and over during the first part of the American Civil War, President Lincoln beseeched “The Young Napoleon” to do something – but for the most part, McClellan came up with excuse after excuse as to why he couldn’t. Eventually, Lincoln had enough and McClellan was fired.

Just under seventy years later in Germany, Adolf Hitler came to power. A ruthless and initially successful politician who cruelly took advantage of his times, Hitler was nonetheless a disaster as a military commander. Churchill nixed an assassination plan in the fear that whoever replaced Hitler might be competent. Propaganda Minister Josef Goebbels styled Hitler “Der Gröfaz,” a German acronym for “Greatest Field Marshal of All Time” — German generals used it disparagingly.

And then there is General Antonio Lopez de Santa Anna, Mexico’s “Napoleon of the West.” Between 1833-1855, Santa Anna was President or “dictator for life” several times, including after what might have been one of the greatest military mistakes in the history of the Western Hemisphere.

Santa Anna is most famous for his victory over the Texans and volunteers from the U.S. (most notably Jim Bowie and Davy Crockett and his Tennessee Volunteers) at the Alamo in September 1835 during the Texas War of Independence. He then went on to secure infamy (in Texas and the U.S.) by killing more than 300 prisoners after his victory at the Battle of Goliad (1836).

Generally speaking, Santa Anna was not a bad military leader, but he was a supreme egoist and fell victim to better generals with less of a God-complex. Santa Anna was from a rich Spanish family and had ties to most of the elite ruling class of Mexico.

This, a natural charisma, and the incompetent rule of others enabled him to make comeback after comeback until he was finally exiled for life in 1855, even after leading the country during the disastrous Mexican-American War of 1846-48.

He had begun his military/political career by backing the right people in power struggles for the leadership of Mexico. Rising through the ranks, Santa Anna won a cheap victory over a halfhearted Spanish attempt to win Mexico back for Spain, and swiftly became a rising political figure in Mexico.

He eventually came out on top in a power struggle with another strongman in 1831, after which he was named the president. Most of his time was spent giving himself medals, womanizing, and going to cock and bullfights.

In 1836, Mexico had possession of what is today’s American Southwest. Arizona, New Mexico, most of California and Texas. In late 1835, white settlers in Texas, along with a surprising number of Mexican settlers, launched a revolution to win independence from Mexico.

There were many reasons for the Texans wanting independence – increased and more oppressive rule from the central government in Mexico, increased economic ties to the United States, and a cultural affinity towards the U.S.A. were among them.

In February and early March 1836, after a number of localized clashes between Mexican militia and locals, the Texans (sometimes called “Texians”) fortified the Alamo Mission near San Antonio. The well-known story ended in disaster for the Texans, but gave them a rallying cry, and brought the United States down firmly on the side of the rebels.

Santa Anna and the Mexican government (one and the same) had declared all those in rebellion to be “pirates” who would suffer dire consequences. Virtually all of the men at the Alamo were killed, a handful of them after being taken, prisoner. At Goliad in late March, Mexican troops under Santa Anna killed upwards of 400 prisoners in cold blood after defeating the Texans in battle there. Given the Alamo and Goliad, the ire of the Texans towards Santa Anna could not be constrained, and in April, Texan forces led by Sam Houston met the Mexican Army and Santa Anna at San Jacinto.

Slightly outnumbered, the Texans had surprise on their side: they moved faster than Santa Anna expected, and to make matters worse, the Mexican general neglected an important duty – he did not post lookouts. After his one-sided victories at the Alamo and Goliad against outnumbered and outgunned Texans, Santa Anna had begun to believe his already inflated ego and discounted his opposition – always a recipe for disaster.

On the night of April 20, 1836, Mexican and Texan troops fought a series of skirmishes in the woods around the modern town of LaPorte. The next morning at dawn, the Texans stormed the main Mexican position. Santa Anna’s headquarters tent was in the worst possible place – one of his subordinates later said that “…the camping ground of His Excellency’s selection was in all respects, against military rules. Any youngster would have done better.”

Soon, the Texans were closing in on Santa Anna, who was asleep at the time of the ferocious Texan attack. He woke up to find them closing in from every direction. Despite his screaming orders left and right, the Mexican forces were defeated in eighteen minutes, and Santa Anna was taken, prisoner. As terms of his surrender (and likely survival), Santa Anna acceded to the Texans’ demands and Texas became an independent country – the only American state to have ever been its own republic (1836-1845).

Through the unforeseen twists of history, Santa Anna was able to make not one, but two comebacks to lead Mexico, despite defeat in the Mexican-American War. Though he was the ultimate political survivor, he never became a better ruler, allowing and taking part in massive corruption and foisting unpopular laws on the poorer classes of the nation.

Even after being ousted in 1854, Santa Anna attempted two comebacks – one for a junior position of power under Emperor Maximilian in 1864, and another to get his pension (denied!) ten years later. He died living off the generosity of his son-in-law and died in 1876.