The 500-year-old kiln could shed light on the construction of Henry VIII’s Tudor Palace in Essex.

A mysterious hole in the ground could be the 500-year-old kiln of the fearsome King of Tudor, famous for his lavish banquets. Archaeologists believe that the kiln used in the construction of King Henry VIII ‘s Palace in Beaulieu has been unearthed. Researchers were given a go-ahead for excavation prior to the start of work on new housing developments in the area. 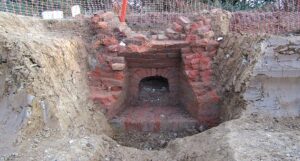 The old oven was reportedly used by Oxford Archeology East, which, along with the engineering firm AECOM, was granted permission by Countryside and L&Q developers to carry out an archaeological assessment programme in advance of development.

Dig at the Beaulieu development in Chelmsford, Essex, began at the end of August 2016, while the ongoing excavation has been going on. The kiln was uncovered on 13th september 2016, with initial estimates stating that it dates back to either the 16th or 18th century.

‘The kiln itself would have been used to produce lime (calcium oxide) for use in mortar, concrete and plaster by burning limestone or, in this case, chalk,’ the developer Countryside confirmed in a joint statement with its co-developers L&Q and Oxford Archeology East. which has carried out the dig. 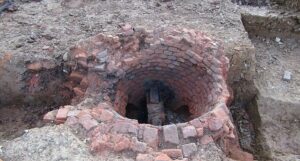 ‘The date of the kiln suggests that it may relate to the construction or later development of Henry VIII’s Palace of Beaulieu, which is now known as New Hall.’  New Hall School is an independent boarding school.

Chelmsford Museum manager Nick Wickenden said: ‘The county council are aware of this. They are keeping tabs on the situation and are currently excavating the site. They had to apply for planning permission to do so’.

Mr Wickenden told MailOnline that the museum would receive any portable finds from the dig. ‘However, a structure the size of oven would most likely be left in place and covered over’, said Mr Wickenden.

The firm developing the land would be under no requirement to protect the Tudor oven unless it was scheduled as an ancient monument by authorities, which is unlikely in this case, said Mr Wickenden.    The site where the oven was found is closed off to the public for health and safety reasons.

‘Further scientific dating and analysis of the structure will help to provide a more precise date for the kiln and aid our understanding of how it fits into the story of Beaulieu,’ confirmed Countryside in a joint statement.

In February 2009 Channel 4’s Time Team visited New Hall to film a documentary called Henry’s Lost Palaces. King Henry VIII reigned from 1509 until 1547 and was known for his love of rich food and for his six wives.

Henry VIII ‘s Mary Rose is still giving up her secrets almost 500 years after she sank. The impression of this artist shows a powerful sailor who was thought to be the carpenter of this ship, a man from the mid to the late 1930s around 5 ft 8 in tall and who died under deck.

But the identities of hundreds of other drowned sailors remain a mystery, which British scientists hope to solve with help from international academics. By assembling bones retrieved from the depths of the Solent, they already know the carpenter’s teeth were rotten, with a major abscess, and he had arthritis and skull pitting suggesting scurvy.

His remains were found in a cabin used to store cable, he wore a tool belt, and the remains of a dog, a brown Jack Russell cross experts nicknamed Hatch, were discovered nearby. Examination of his skull was used to create an image of a man with a broad face, deep-set eyes, thin lips and a boxer’s nose.

While he is depicted with light brown hair and blue eyes, only DNA analysis would confirm this. And by photographing and scanning thousands of other unidentified bones, experts hope to piece together whole skeletons by putting them online.