When a thirsty pregnant horse drank from freshwater lake 47 million years ago,she was unaware that poisonous volcanic gases might lead to her sudden demise.

Now, the fossilised remnants of the mare and its tiny unborn foal show new insights into reproduction in ancient horses, including surprising reproductive similarities with today’s horses, according to a new study.

According to UN Educational, Science and Environment Organization, scientists found the old horse (Eurohippus messelensis) in the Messel Pit fossil site, in Germany, a site known for its well preserved fossils, dating back to the Eocene Epoch, between about 57 million and 36 million years ago.

The reproductive similarities between ancient and modern-day horses might seem surprising, given the differences in the animals’ size and anatomy. The ancient mare was small – about the size of a modern fox terrier – and had four toes on her front feet and three on her rear feet. 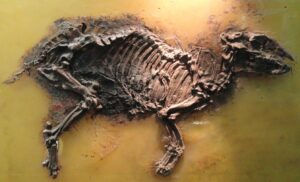 “It’s magnificently preserved,” Franzen told NBC. “It turned out this was an almost complete and articulated skeleton with a fetus.”

The X-ray analysis showed the broad ligament, a structure that connects the horse’s uterus to the backbone, and helps support the developing foal, Franzen said. The X-ray also showed traces of the animal’s crumpled outer uterine wall, a feature that still exists in modern horses.

It’s “exceptional” to find a pregnant fossilized horse in such good condition, said Bruce MacFadden, a distinguished professor and curator of vertebrate paleontology at the University of Florida, who was not involved in the study.

“Completely preserved skeletons of fossil horses are rare,” MacFadden told NBC. “Usually, they’re fragmented and the bones are all dissociated. If you find a skeleton with a preserved foal inside, that indicates exceptional preservation, which is normally not found in the fossil record.”

The mare’s skeleton is one of many fossils that researchers have uncovered in the oil shales at Messel Pit. Since about 1900, researchers have found dozens of fossils in the quarry, including those of mating turtles, moths and lizards.

It’s possible that poisonous volcanic gases killed some of these animals, which sank to the bottom of the lake and became embedded in its muddy sediments. These bodies then decayed as anaerobic bacteria decomposed their skin, muscles and other soft tissues.

However, this process also helped preserve these animals. The bacteria produced carbon dioxide, which precipitated iron that was present in the lake’s water, Franzen said. The bacteria slowly petrified, creating a thin bacterial residue that depicted the soft tissue. Now, researchers can see these soft-tissue remains as images on top of the fossilized bone.

“The bacteria helped a lot and in a very wonderful way,” Franzen said. When they looked at the mare with the high-resolution X-ray, the scientists can see the “tips of hairs of the outer ears — even the interior, like blood vessels, become visible in some cases,” he said. 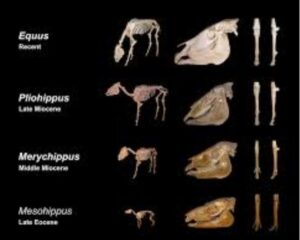 The fetus was likely close to term when its mother died, as it had fully developed milk, or baby, teeth, the researchers said. But the foal’s position – upside down, instead of right side up – suggests that it and its mother did not die during labor. The findings were presented Nov 6 at the 2014 annual meeting of the Society of Vertebrate Paleontology in Berlin.