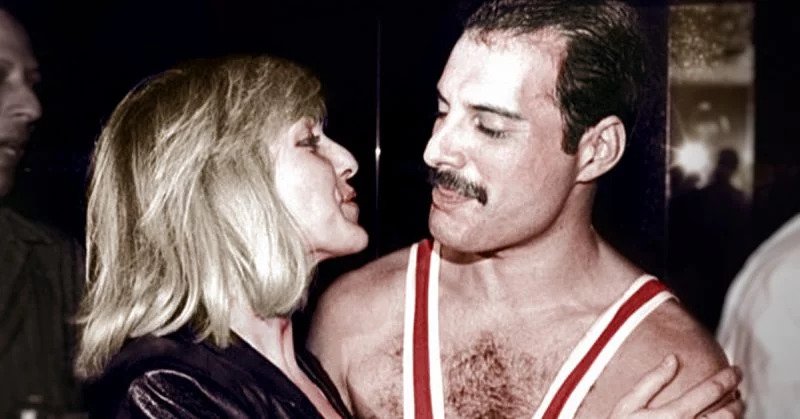 In 1969, when she was 19 years old, Mary Austin and Freddie Mercury met and he was 24. Their connection for a lifetime has demonstrated to be one of a kind.

Mary was raised by two deaf parents in a struggling working-class family in West London. When she was 15, she fell out of college and began working various jobs to support herself.

At the time the two met, Mary was working in a fashion boutique and Freddie had recently graduated from art college.

They quickly fell in love and started living together in a cramped flat. What would become one of the greatest bands, Queen was barely in its beginnings.

However, Queen’s popularity flourished in 1970, and so did Freddie’s income. During the first few years of the band, while Freddie was experimenting with outrageous clothes and was theatrically strutting, with Mary by his side, nobody questioned his sexuality. In 1973, he dedicated the song Love of My Life to her.

Freddie’s mom, Mrs. Bulsara, recalled: “She was lovely and used to come to us for meals. I used to wish they had got married and had a normal life with children.”

In a 2013 interview for the Daily Mail, Mary evoked her memories of one Christmas Day when she was 23 and Freddie gave her a big box as a gift:  “Inside was another box, then another and so it went on. It was like one of his playful games. Eventually, I found a lovely jade ring inside the last small box.” She asked Freddie on which hand should she place it and he replied the left.

But they never married. Although they were together for seven years, in 1976, Freddie finally confessed his infidelities to Mary, revealing himself as a bisexual, to which she replied: “No Freddie, I don’t think you are bisexual. I think you are gay.”

The two separated and Mary moved into a nearby flat, purchased for her by Mercury’s music-publishing company. They ended their physical relationship but remained incredibly close, frequently visiting each other.

Freddie once said: “All my lovers asked me why they couldn’t replace Mary, but it’s simply impossible. The only friend I’ve got is Mary, and I don’t want anybody else. To me, she was my common-law wife.

To me, it was a marriage…We believe in each other. That’s enough for me. I couldn’t fall in love with a man the same way as I have with Mary.”

Mary had two sons with painter Piers Cameron. Freddie was the godfather of the firstborn while the second was born shortly after his death. In 1998 she married businessman Nick Holford but the marriage ended in divorce after five years.

Although she made her own path, Mary Austin remained part of the band’s extended circle. During the 1980s, she often toured with Queen, working as a secretary for their publishing business.

When Freddie told Mary the terrible news of being HIV-positive, heartbroken, she devoted herself to his care. Aware of his impending death, Freddie wanted to make sure that Mary would be financially secure.

He claimed that he owed her a lot as she stuck by him through thick and thin, and after his death in 1991, in accordance with Freddie’s will, Mary inherited the better part of his wealth – more than $10 million plus his 28-room Georgian palace in Kensington, London. His mother reportedly approved of his decision, stating that Mary was like family to her.

Mark Blake, Mercury’s biographer and author of the book Is This the Real Life?: The Untold Story of Freddie Mercury and Queen, says:

“She got the house and a share of the publishing. He effectively left a lot to her as if he was leaving it to his widow. Mary was probably good at keeping him grounded. She had been there before the money, before the fame and she was there at the end.”

The interior of Freddie’s mansion was made by Mary herself. She designed it for him, choosing the Louis XV furniture. To this day, most of the interior design remains just as Freddie liked it.

In the following years, Mary launched a foundation to Mercury’s memory, the Mercury Phoenix Trust, a charity organization that fights HIV and AIDS worldwide.