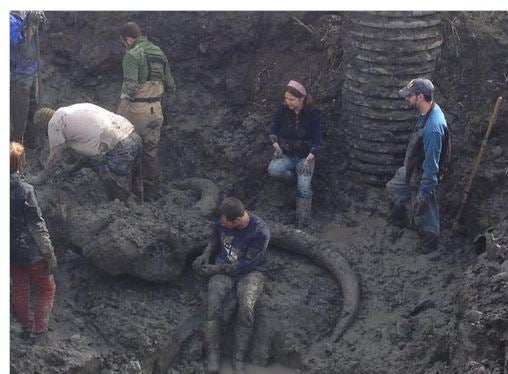 James Bristle, a soybean farmer from Michigan, discovered the bones of a woolly-Colombian mammoth hybrid two years earlier while installing a drainage system on one of his areas.

Now, they have discovered more, according to a press release from Michigan University. Researchers uncovered about 40 extra bones, including an ice age creature’s skull, tusks, and teeth.

“It was probably a rib bone that came up,” Bristle told the Ann Arbor News. “We thought it was a bent fence post. It was covered in mud.”

Researchers from the University of Michigan determined that Bristle had stumbled upon the bones of an animal that has been extinct for over 10,000 years.

Daniel Fisher, a professor at the University of Michigan and director and curator at the university’s Museum of Paleontology, told CBS Detroit that he knew exactly what it was when he saw the bones.

“I saw a part of a shoulder blade and there is a certain curve on a certain part of it that goes one way if it’s a mastodon and another way if it’s a mammoth,” Fisher said. “I recognized that and said ‘humm, I think we have a mammoth here.’ ”

Fisher added that his team retrieved bones from the site, including a “very nice skull and tusks,” ribs and vertebra, and the mammoth’s jaw.

“It turns out we are dealing with carcass parts of animals, in some cases hunted, in other cases maybe not, but in any event, butchered by ancient humans, what we call Paleo-Indians – people who lived in North America about 12 to 13,000 years ago,” he said.

The woolly mammoth lived during the Pleistocene era and was one of the last in a line of mammoth species.

Researchers say that the animal, with its enormous tusks and trunk, looked a bit like a furrier version of the modern-day elephant, and it actually co-existed alongside humans before its extinction.