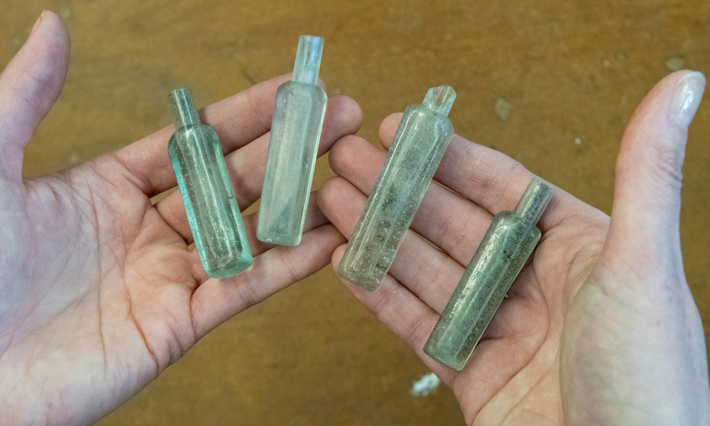 A downtown construction site, scoured by archaeologists before a new brewery went up, has revealed a treasure trove from Missoula’s own little Chinese community and a nearby red-light district.

In the early history of Missoula, from about 1880 until 1920, a small portion of today’s downtown was associated with prostitution enterprises. Nearby, like many western American towns, was located in a Chinese temple, Chinese stores, and Chinese dwellings.

One can only imagine how fascinating and colorful the place must have been. Now, pieces of that part of Missoula’s history have been brought back to life thanks to archaeology researchers and students at the University of Montana.

Before the construction of a new brewery and pub on the 200 blocks of West Main Street last summer, they spent countless hours digging and sifting through the dirt and debris to uncover thousands of artifacts that shed light on the lives of Missoulians from over a century ago.

According to UM anthropology professor Kelly Dixon and UM anthropology graduate student Kate Kolwicz, it’s one of the most significant cultural, archaeological and anthropological discoveries ever made in the Garden City.

“The site is of great importance to understanding the lives of underrepresented sociocultural groups from Missoula’s past,” Kolwicz and Dixon wrote in an email to the Missoulian. “The artifacts represent the last monuments we have about these people. We are literally relying on fragments of broken pottery to understand the nuances of their day-to-day lives and to illuminate the nuances of our shared, diverse history.”

The site turned up glass and glass bottles, oyster shells, crab claws, pig skulls, rooster bones, ceramic and metal objects like an old Chinese lock and what appears to be a pocket knife.

Artifacts commonly associated with the Chinese residents of the area, who came in the late 1800s as workers on the Transcontinental Railroad, were all over the place. In her office on the UM campus, Kolwicz has bags full of pieces of rice bowls, medicine vials, and food and beverage storage vessels. Opium paraphernalia, known to have been used by people of all cultural backgrounds including Chinese, was also present.

“Collectively, this suite of artifacts convey information about a range of topics that put us in touch with Missoula’s past residents, including their food and drink, healthcare practices, and social life,” Kolwicz and Dixon wrote.

Jed and Jennifer Heggen, UM alumni and owners of the soon-to-open Cranky Sam Public House, partnered with an archaeology team before starting construction last summer. They had “unexpectedly found themselves atop a major archaeological site that was in the heart of Missoula’s red-light district and Chinese community from about 1880 to the early 1920s” according to Kolwicz. That’s why the Heggens changed the name of the brewery to honor Cranky Sam, a Chinese resident of Missoula who was often featured in newspaper articles.

Nikki Manning, a UM archaeology graduate student who helped on the project, said red-light districts and “Chinatowns” were commonly found in close proximity to one another in many towns across the American West. She noted that white doctors would often refuse to treat prostitutes, but Chinese doctors had no such qualms.

“The artifacts collected at the site are critical to understanding what life was like for these early Missoulians,” Manning said. “Because of the small size of the neighborhood and the amount of urban development that has occurred over the past century, this is one of the only intact archaeological sites pertaining to the red-light district and Chinese community in Missoula that we are likely to find.”

Missoula’s early fire insurance maps, called Sanborn Maps, show that there was a two-story wooden Chinese temple at the site of what is now Biga Pizza, and an empty lot next door. That lot is where the team found the artifacts because it had been paved over decades ago by an auto shop and everything was perfectly preserved in time. The Sanborn Maps also show multiple “female boarding” rooms, which Manning and Kolwicz said were associated with prostitution.

Dixon said researchers are carefully examining and testing and sorting the materials.

“We are incredibly grateful to Biga owner Bob Marshall, as well as the Heggens, for their sincere stewardship and support of the research programs that are blossoming as a result of these materials,” Dixon said. “I know it is important to the business owners and our research team to avoid sensationalizing the artifacts or using them to perpetuate common stereotypes based upon race, culture and social status. We look forward to sharing our ongoing findings, as well as lessons from the past that are applicable to our complex world today.”