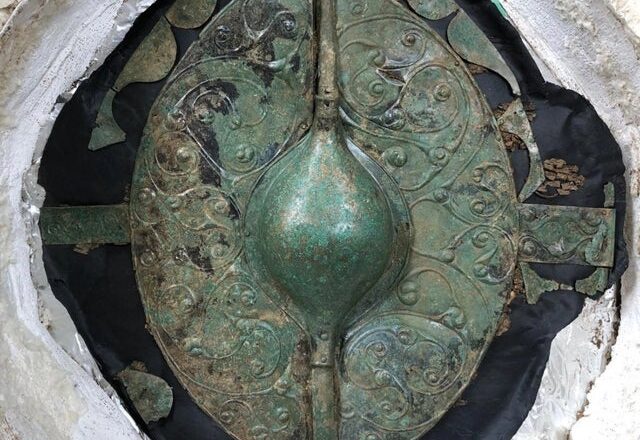 An elaborate Iron Age shield found in an impressive ‘warrior grave’ in Yorkshire in 2017 is being hailed ‘the most important British Celtic art object of the millennium’.

The complex pattern of the bronze shield ‘s face-with a whirl, symmetrical pattern and elevated boss-was uncovered in meticulous conservation research.  Alongside this decoration, the discovery of a sword puncture hole and evidence of past repair work challenges the idea that such shields were purely decorative.

The discovery was found in a housing development near Pocklington, with a chariot and two horses, two human beings and sacrificial pigs. The remarkable 30″ (75cm) shield was discovered in the ‘warrior tomb’ unarthed last year at the Persimmon Homes building site called ‘The Mile’ in Pocklington, Yorkshire.

The grave also contained an upright chariot, two ponies positioned in a leaping stance, a bronze-and-red-glass brooch and various other precious artefacts. The shield was found face down in the chariot, covered by a man’s skeleton who was likely once its owner, who dates back to around 320–174 BC.

Experts believe that this ‘warrior’ was aged over 46 and was likely a higher respected member of his community, as he was buried with an offering of six pigs and adjacent to an additional grave of a younger, injured man.

‘The magnitude and preservation of the Pocklington chariot burial has no British parallel, providing a greater insight into the Iron Age epoch,’ said MAP Archaeological Practice’s Paula Ware, who completed the excavation.

After undergoing a lengthy conservation process, the shield’s ornate design has finally been revealed. It sports a swirling pattern on its face, one typical of early Celtic art and the so-called ‘La Tène’ culture that spanned Europe from around 450–1 BC.

Experts believe that the design was crafted by hammering the shield from its reverse side, allowing the creator to fashion an asymmetrical pattern of mollusc shells in a series of three-legged, triskelion-like whorls around the central raised boss.

‘We don’t know how the man died. There are some blunt force traumas but they wouldn’t have killed him,’ said Ms Ware. ‘I don’t think he died in battle; it is highly likely he died in old age.’

‘What his role was I can’t tell you. He has collected some nice goodies along the way – he is definitely not run of the mill.’ Moreover, Ms Ware added, the nature of the burial is indicative of a belief in an afterlife.

‘These horses were placed with their hooves on the ground and their rear legs looking as though they would leap out of the grave,’ she said. ‘For me that definitely indicates they were moving onto something else – he has his food, weapons and the means of travel.’

‘The shield features a scalloped border. This previously unknown design feature is not comparable to any other Iron Age finds across Europe, adding to its valuable uniqueness,’ said Ms Ware.

‘The popular belief is that elaborate metal-faced shields were purely ceremonial, reflecting status, but not used in battle,’ she added.

‘Our investigation challenges this with the evidence of a puncture wound in the shield typical of a sword. Signs of repairs can also be seen, suggesting the shield was not only old but likely to have been well-used.’

The only similar piece of armour to have been found – the so-called Wandsworth shield -was recovered from the Thames River in 1849 and presently resides in the collections of the British Museum.  ‘The excavation at The Mile development is a truly magnificent discovery for British history,’ said Persimmon Homes Yorkshire director Scott Waters.

‘We feel this recognition and find should remain in the local area,’ he added, with the shield to be donated to a local museum – possibly at nearby Burnby Hall.