A nearly 1,500-year-old Roman furnace was discovered during excavation work on a construction site in the town of Silistra.

According to archaeologists, this is the largest Roman-era building ceramic furnace discovered in Bulgaria, a BGNES correspondent for the region reports. 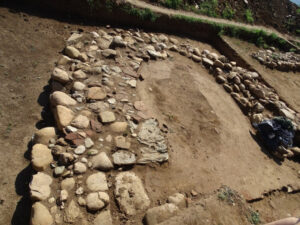 The facility has a combustion chamber that is completely preserved. The grill on which the bricks were baked in Roman times is also preserved.

The furnace has two levels. On the lower level there are the two combustion chambers in which the fire that warms the grill was lit.

Above the grill is the upper chamber of the furnace. The grill has an area of about 15 sq.m., said archaeologist Christian Mihaylov.

This furnace can take up about 10-15 firings and 10-15 productions cycles of bricks. Keep in mind that the temperature that could be reached in it is about 900degrees, Prof. Georgi Atanasov said on his part.

According to experts, the technology has not differed much from today’s way of making bricks.

Just like the bricks are made now, in ancient time they were left in the sun in wooden molds so as to prevent them from sticking together.

The warm air came out from holes in the chambers with a very high temperature and baked the bricks, Atanasov stressed..

In the middle of the 6th century, Roman buildings were built of bricks, and the buildings preserve the spirit of those times.

Observing the size of the bricks, looking closely at their decoration, we do not rule out that this furnace produced bricks for the construction of the magnificent castle on the Danube coast of Justinian the Great, erected around 620-630, Atanasov also stressed.

The fate of the valuable find will be decided by the Ministry of Culture at the end of the month. /BGNES