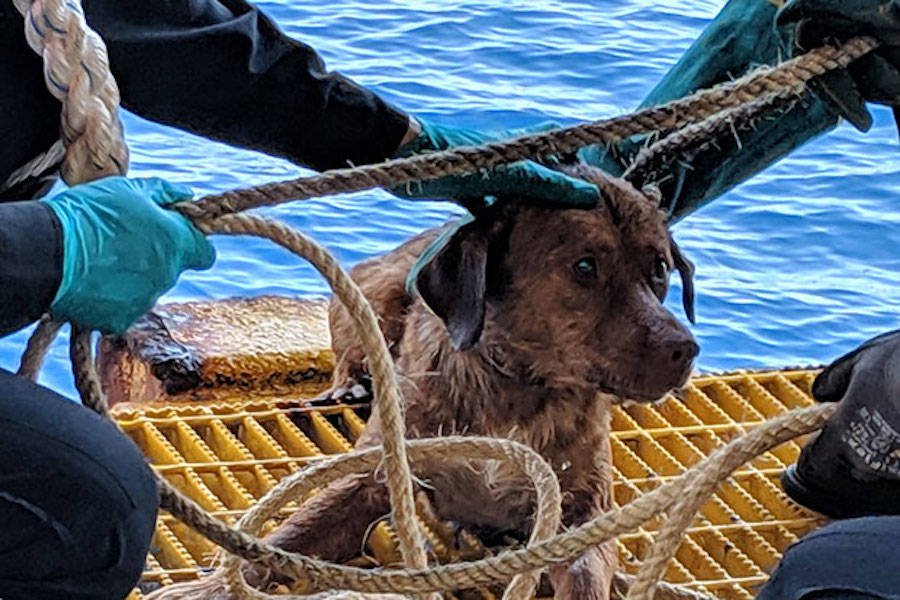 A dog found swimming more than 220 kilometers (135 miles) from shore by workers on an oil rig crew in the Gulf of Thailand has been returned safely to land.

Working on an isolated oil rig in the middle of the ocean would likely cause many people to start losing their mind at some point. And when workers on an oil rig 135 miles offshore in the Gulf of Thailand recently noticed a dog paddling toward them, they surely couldn’t believe their eyes.

But this brown Aspin was no illusion. According to the Daily Mail, workers first noticed the pup as its head bobbed in and out of the water, then rapidly focused on getting it aboard the rig as it came near.

“We found her trying to swim towards our rig, which is about 135 miles from the shore,” said Vitisak. “Thankfully the sea was quite still because the wind was calm. We just saw her small head but if the ripples were bigger, I think we probably wouldn’t have noticed her at all.”

While nobody quite yet understands how this impressive pooch — named Boonrod, or Survivor, by the workers — managed to swim so far into the endless ocean, there are essentially two viable theories thus far: she either jumped off a ship nearby or has swimming stamina that is nothing short of shocking.

After workers lowered a rope and pulled the dog to safety, the ocean-conquering Aspin could finally stop paddling. As a reward, she was dried, fed, and given a makeshift shelter to rest in. The dog stayed on the platform for two nights before moving on to her next temporary home.

A passing oil tanker was notified of the situation and agreed to let the dog onboard. By using a crane, oil rig workers made sure to safely enclose the animal and lift her onto the northbound vessel. She was taken to Songkhla in southern Thailand on Monday to get some needed veterinarian care.

Member of Chevron Thailand Exploration and Production’s oil drilling team Vitisak Payalaw, who helped save the brown Aspin, however, would love to get her back on a more permanent basis. He said that he’s more than willing to adopt her, should no actual owner come forward now that she’s safely back on land.

According to The Bangkok Post, the most likely reason for the dog’s dangerous adventure was that she fell from a local fishing boat. Presumably, nobody noticed she fell overboard, which led to her seemingly endless paddling.

“When we first took her onboard she was depressed and tired from being the water for a long time,” said Vitisak. “She had lost her body water. When we gave her water and minerals her symptoms improved. She started sitting up and walking normally.”

As it stands, the resourceful pup is under the care of animal charity Watchdog Thailand and getting a comforting checkup after enduring such an ordeal. Thankfully, everything seems to be in order thus far.

“The boat arrived at 10 a.m. and the dog was in good spirits,” the charity said. “We took her to the vets to be checked and she was found to be healthy. Everybody who played a part in co-coordinating the rescue has done a brilliant job.”

In the end, this courageous young seafarer has certainly earned the name Survivor. Hopefully, she not only gets to keep it — but can find a home with the man who saved her.