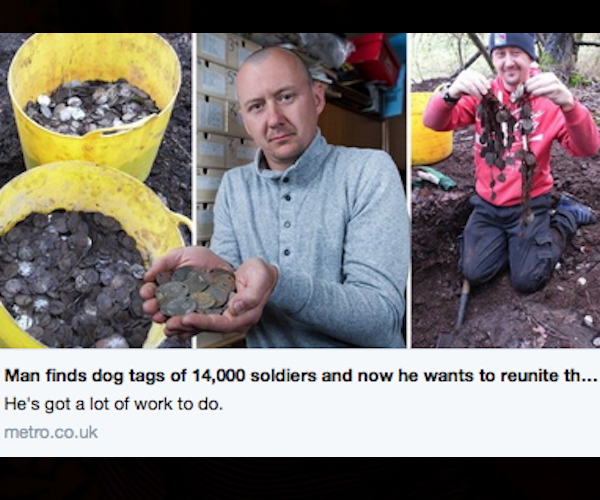 WWII Dog Tags Found Near London From More Than 14,000 Soldiers

One of the first countries to declare war on Germany at the beginning of World War II was the United Kingdom, just two days after Poland’s Nazi invasion and the official start of the war.

Britain remained in the war until the end as one of the world’s largest military forces, being one of the countries to successfully defend its territory against German aggression and losing their lives in the war to about 400,000 British.

Those victims will never be forgotten, and a recent discovery truly touched many people around the globe, as it brought back memories of the soldiers involved in the clash.

More than 14,000 dog tags were discovered in a field near London, hidden beneath the ground beside an anti-aircraft gun.

The small metal plates have the names of soldiers who participated and lost their lives in World War II, including many of those who took part in the invasion of Normandy.

The discovery was made by 37-year old relic hunter Dan Mackay, who found the dog tags while searching in the field. Mr. Mackay now wants to do deliver all the dog tags to living veterans and the families of the deceased soldiers.

The interesting fact about the dog tags is that they were never delivered to the soldiers fighting on the battlefronts. During the war, dog tags were made out of asbestos fiber and metal tags were introduced after 1960.

The founder believes that the UK Army at some point wanted to exchange the old dog tags with the metal ones, but implemented them much later due to the conflict.

The dog tags were found near the closed factory that produced them and were probably buried by the workers as a way to get rid of unnecessary inventory.

Dan Mackay is now busy tracing the relatives of the soldiers. He has so far managed to locate 8 of them and reunite them with the memorabilia of their beloved.

As the Telegraph reported, there are dog tags belonging to decorated soldiers, men who were published in military magazines and soldiers who were taken prisoners during the war.

The founder has launched a nationwide campaign and is ready to travel all around the United Kingdom in his quest to find the ones he believes deserve to receive the dog tags.

Dan Mackay has requested help from organizations such as the British Legion, various military magazines, and historians, but has been rejected. He received help via the Forces War Records website, which helped him connect to Frederick Henry Bills, a surviving veteran of World War II.

Mackay encourages anybody that has any kind of connection or information about the names on the dog tags to contact him via the Extreme Relic Hunters Facebook page.