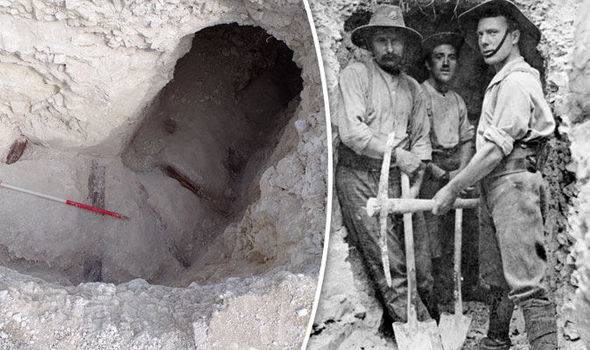 England’s Salisbury Plain is famous as the home of Stonehenge and other enigmatic ancient site. But it has just yielded a much more recent archaeological wonder: a network of World War I tunnel.

Archaeologist report they have found these century-old passages on a military base, complete with grenades, food tins and graffiti preserved inside.

A large portion of Salisbury Plain is used as training ground for the British Army. This was true during World War I, too, and combat engineers and miners were trained at the site to build tunnel that would allow soldiers to plant bombs under enemy trenches on the Western Front.

The tunnel were discovered recently by archaeologists conducting salvage excavations ahead of the construction of new Army housing at Larkhill on Salisbury Plain.

So far, they have excavated about 5 miles (8 kilometers) of trenches, with the work being done alongside bomb-disposal specialist, because some grenades left there were still live, according to a statement from Wessex Archaeology, one of the organizations working on the site.

Martin Brown, an archaeologists with the consulting group WYG, said the project is “the largest single investigations of First World War training trenches anywhere in the world.”

“That we did not expect these underground tunnels shows that much remains left to discover, even from only a century ago,” Brown said in the statement.

Ahead of the 1917 Battle of Messines in Belgium, British Gen. Herbert Plumer reportedly told his soldier, “Gentlemen, we may not make history tomorrow, but we shall certainly change the geography.”

His remark could have applied to many of the battle fought during World War I. The dense networks of trenches and tunnel, and the huge explosions from bomb, left irreversible scars in the landscape.

In addition to Salisbury Plain, sites like the Gallipoli battlefield in Turkey have been studied by archaeologists looking for new historical insight.

World War I battlefield have also attracted the attention of geologists and geographers. Researchers have, for example, shown how heavy bombing changed the long-term ecology of Verdun in France.

At the newly found training tunnels in England, archaeologist said they discovered more than 100 bits of graffiti.

They documented many names of soldier scratched into the chalk walls, including that of Australian Army Pvt. Lawrence Carthage Weathers.

He was awarded the Victoria Cross, the highest British military honor, for attacking a German machine gun post and taking 180 prisoners during the 1918 Battle of Mont Saint Quentin.

“It has been a humbling experience for archaeologist to stand and read the names of young soldiers in the very spaces they occupied before embarkation to the horrors of the trenches,” Si Cleggett, project manager at Wessex Archaeology, said in the statement.

“It may be a clichébut, having stood in their footprint a hundred years after their days of training at Larkhill, we really will remember them.”