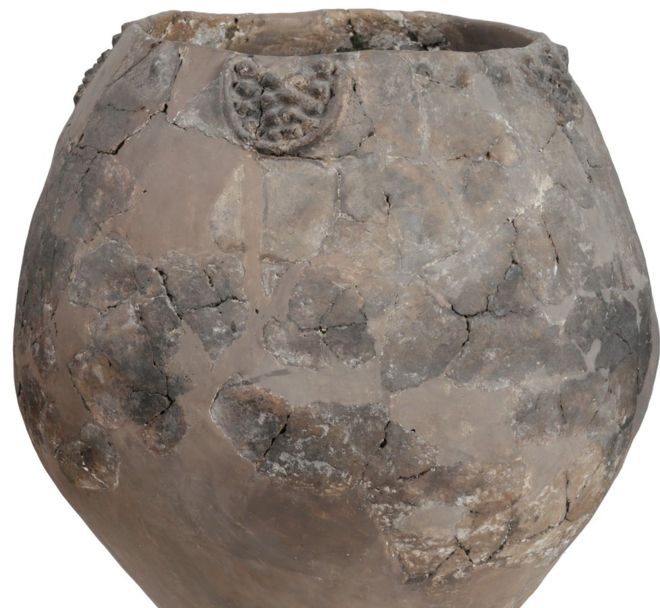 This remarkable find deserves a toast: People were fermenting grapes into wine about 8,000 years back in what is now the Republic of Georgia, say scientists who found what’s now considered the oldest known winemaking site on record.

Archaeologists discovered ceramic jars that showed proof of winemaking during an excavation of two Neolithic sites called Gadachrili Gora and Shulaveris Gora, which are in the South Caucasus, about 30 miles (50 kilometers) south of Tbilisi, Georgias capital.

Previously, the oldest evidence of winemaking was discovered in the Zagros Mountains of Iran, and dated to between 5500 B.C. and 5000 B.C. The new discovery, dated to 6000 B.C., shows that people were enjoying the alcoholic drink a good 600 to 1000 years longer than formerly thought, the researchers stated.

During the excavation in Georgia, researcher uncovered fragments of ceramic jars.

While analyzing the chemical residue on shards from 8 large jars, the scientist found tartaric acid, a fingerprint compound of grapes and wine.

“We believe this is the oldest example of the domestication of a wild growing Eurasian grapevine solely for the production of wine,” study co researcher Stephen Batiuk, a senior research associate in the Department of Near and Middle Eastern Civilization and the Archaeology Centre at the University of Toronto, said in a statement.

“Pottery, which was ideal for processing, serving and storing fermented beverages, was invented in this period together with many advances in art, technology and cuisine,” Batiuk said.

Moreover, there are more than 10000 varieties of table and wine grapes worldwide, and “Georgia is home to over 500 varieties for wine alone, suggesting that grapes have been domesticated and cross breeding in the region for a very long time,” Batiuk said.

A number of analysis — including archaeological, chemical, botanical, climatic and radiocarbon — indicate that the Eurasian grape known as Vitis vinifera was abundant at the 2 Neolithic sites.

This grape likely had ideal growing conditions in these Neolithic village, which had conditions close to those of the modern wine producing regions of Italy and France, the researchers said.

It is no surprise that once ancient farmers domesticated the grape, wine culture followed, Batiuk added.

These ancient societies were awash in wine, which permeated nearly every aspect of life, including medical treatments, special celebration and everyday meals.

Viniculture is complex; it includes domestication, propagation, selection of desirable traits, wine presses, suitable containers and proper closures (such as modern-day corks), the researcher wrote in the study, which was published online today  in the journal Proceedings of the National Academy of Sciences. And now, people living in the South Caucasus have reason to be proud of the history within their region.

“The Eurasians grapevine that now accounts for 99.9 percent of wine made in the world today has its roots in Caucasia,” Batiuk said.