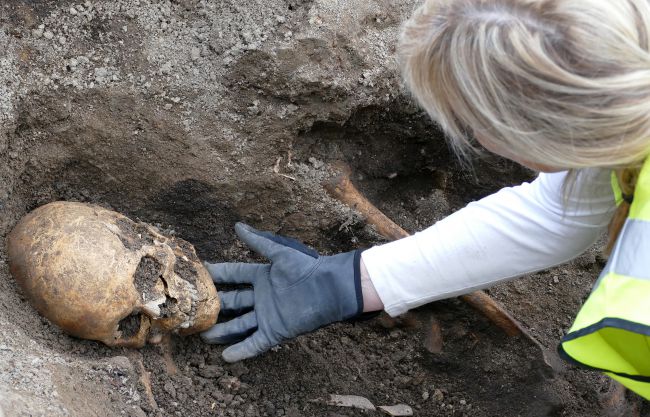 In Uppsala, Sweden, archeologists recently found two Viking burial ships, one of which was extremely preserved and holding the ruins of a dog, a man, and a horse.

The Vikings sent a handful of their powerful elites to the afterlife in boats laden with sacrificed animals, weapons and treasure; the funeral practice dates back to the Iron Age (A.D. 550 to 800) but was used throughout the Viking age (A.D. 800 to 1050), according to a statement.

These richly appointed graves have been discovered across Scandinavia.

For example, archaeologists had previously found one such burial boat in Norway that had evidence of human remains and one in western Scotland that contained a slew of burial items such as an ax, a shield boss, a ringed pin, a hammer, and tongs.

The elites who were given such elaborate send-offs were also often buried with animals, such as stallions.

These burial boats were typically built with overlapping wooden planks (called “clinker-built”) and had symmetrical ends, a true keel, and overlapping planks joined together, said Johan Anund, the regional manager for The Archaeologists, an archeological organization working with the National Historical Museums in Sweden.

Archaeologists have also found other, simpler boat structures, such as longboats, which are like a dugout wide canoe.

“We don’t know much” about the man yet, Anund said. But analysis of the skeleton will reveal how old he was, how tall he was and if he had any injuries or diseases.

Anund’s group may even be able to figure out where the man grew up and where he lived for most of his life, Anund said.

As for the animals buried with him, they could have been sacrificed to help the dead person on the “other side” but could also be there to show the man’s status and rank, Anund said. It’s common to find horses and dogs in such burials, but also big birds like falcons.

Archaeologists also found other items on the boat such as a sword, spear, shield, an ornate comb, and leftover wood and iron nails that were likely used in its construction.

The other boat was badly damaged, probably because a 16th-century medieval cellar was built right on top of it, according to the statement.

Some human and animal bones were still preserved on the damaged ship, but they seem to have been moved around, making it difficult for archaeologists to say much about them, Anund said.

Archaeologists discovered the ships, the well, and the cellar after a plot of land outside Uppsala was marked off to become a new building for the vicarage of Gamla Uppsala parish.

They excavated the boats last month and some of the finds will go on display at Gamla Uppsala museum and the Swedish History Museum in Stockholm.