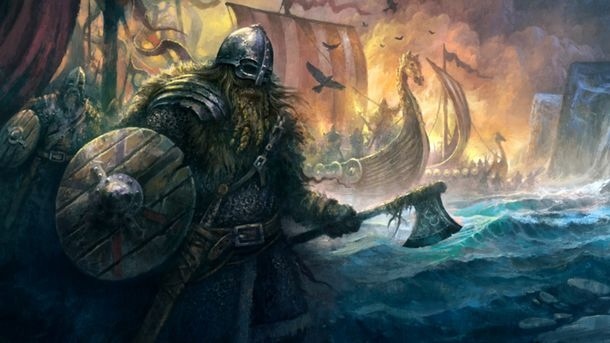 What made the Vikings so superior in warfare?

Vikings tried to gain a reputation for their first-ever raids and piracy in many parts of Europe, especially England, Ireland, and Frankish territories. The term “Viking age” refers to the period roughly from 793 AD to the late 11th century in Europe.

In this era, Viking activity started with raids on Christian lands in England and eventually expanded to mainland Europe, including parts of present-day Russia.

While maritime battles were rare, Viking bands proved very successful in raiding coastal towns and monasteries due to their efficient warships, and intimidating war tactics, skillful hand-to-hand combat, and fearlessness. What started as Viking raids on small towns transformed into the establishment of important agricultural spaces and commercial trading-hubs across Europe through rudimentary colonization.

Vikings’ tactics in warfare gave them an enormous advantage in successfully raiding (and later colonizing), despite their small population in comparison to that of their enemies.

The Vikings did not win all their battles

Rosendahl begins with a caution. Although Vikings were feared throughout Europe, they did not win all of their battles – far from it – even though many people seem to think so.

In fact, the sources also document how raiding Vikings suffered major defeats when they invaded foreign kingdoms and territories. “Many archaeological and written sources show that the Vikings lost quite often. We’ve, for example, found a couple of Viking mass graves, which tell a story of failed raids,” says Rosendahl.

That said, there is no doubt that the Scandinavian warriors were rather successful in most of their endeavors. The plundered treasures from monasteries, villages, and even major cities witness as much.

Experts in the element of surprise

One of the reasons for this was the Vikings’ superior mobility. Their longships – with a characteristic shallow-draft hull – made it possible to cross the North Sea and to navigate Europe’s many rivers and appear out of nowhere, or bypass hostile land forces. “This is what happened at Lindisfarne in 793CE. The Vikings came out of the blue in a type of surprise attack that no one thought possible,” says Rosendahl.

But Vikings are far from alone in exploiting superior mobility in warfare, she says. Asian nomads such as the Huns raided far and wide in the 5th century CE, the same goes for the Islamic expansion after Muhammed’s death in 632 CE, and the Magyar’s campaigns in Central Europe in the 10th century CE.

The Vikings also maintained a vast network, which allowed them to strike exactly when treasuries and granaries were ripe – and resistance at a minimum.

Vikings often knew where and when large masses of peoples gathered for trade fairs. One example of this is the raid on Nantes in 843 CE. Every year, people from far and wide came to Nantes on the day of Saint John’s Eve to celebrate John the Baptist. You can probably guess which day the Vikings showed up.

“The Vikings surveilled the areas within their reach. They then waited for the right moment to strike – and [in the case of Nantes] they had most likely also made an alliance with a Frankish count who wanted to secure the city for himself,” says Rosendahl.

The Early Middle Ages was a tumultuous period and the Vikings knew how to exploit this to their advantage. Political unrest and power struggles typically meant that kings and princes were busy fighting each other – which meant they were not around to protect towns or monasteries against raiding Vikings.

This happened, for example, when the three sons of the Frankish emperor Louis the Pious – son of Charlemagne –revolted against him. Nearly a decade of civil war followed, and the Vikings were on the spot to capitalize on the internal struggles. “We can see that the Vikings knew exactly which countries were strong or not,” says Rosendahl.

Vikings were armed to the teeth

Now it’s time to look at the military hardware. Archaeological findings show that the Vikings had everything required of a terrible foe. Their axes, swords, spears, bows and arrows, shields, and armour were equal to the weapons and armours of continental Europe and Britain – and often of the highest quality available at the time.

“In fact, many of the swords used by Vikings came from Frankish swordsmiths, who produced exceptionally good swords. But as the Frankish rulers began to realize that their own weapons were being used against them, they prohibited the selling of them to the Vikings,” says Rosendahl. The Norsemen also knew how to use siege engines such as catapults and battering rams. All of these were employed by the Vikings during the Siege of Paris in 885-886 CE.

Advanced combat tactics also contributed to the Vikings’ successful raids. The image of Vikings jumping off boats and charging straight into the nearest town with axes and swords swinging is more of popular fantasy, says Rosendahl.

Attacks were most likely carefully planned and executed – both in the case of smaller raiding parties or large Viking armies. When the Danish kings Sweyn Forkbeard and Cnut the Great attacked England in the early 11th century, their armies contained thousands of men and hundreds of ships. Such armies must have required a strong command hierarchy where the king held supreme command.

Furthermore, most Vikings were skilled warriors. They lived in violent times and idealised warrior culture. It was a requirement that all male Vikings had completed weapons training so they could defend their villages during attacks. So when they went raiding, it wasn’t just a band of bearded farmers who roamed around; it was well-educated soldiers who knew how to handle themselves. And they were not afraid of dying.

“According to a saga about the Norwegian king, Magnus Barefoot, who died young during a raid in Ireland, he said: ‘Kings are for honour, not a long life,’ which is a pretty good illustration of the mentality of Viking warriors. It was honourable to die valiantly on the battlefield – and honour was more important than anything,” says Rosendahl.

The Vikings settled and the Viking Age ended

Europe’s kingdoms slowly adapted to the Vikings’ way of warfare and succeeded in denying them their crucial advantage: mobility. This was, for example, achieved by building fortified bridges on the rivers. This blocked the longships while the defenders could send a rain of arrows and stones down on the Vikings below. Over time, large groups of Vikings settled around Europe – by conquering land or after signing peace treaties with the local rulers and sometimes promising to protect the land against other Vikings.

One such example is Normandy, which was granted to the Danish or Norwegian Viking chief Rollo in return for swearing allegiance to Charles the Simple, King of West Francia (898-922 CE). Rollo’s great-great-great-grandson was William the Conqueror, who would go on to conquer England and establish Norman rule in 1066 CE. The Vikings terrorised Europe for approximately 250 years, after which they never returned again.