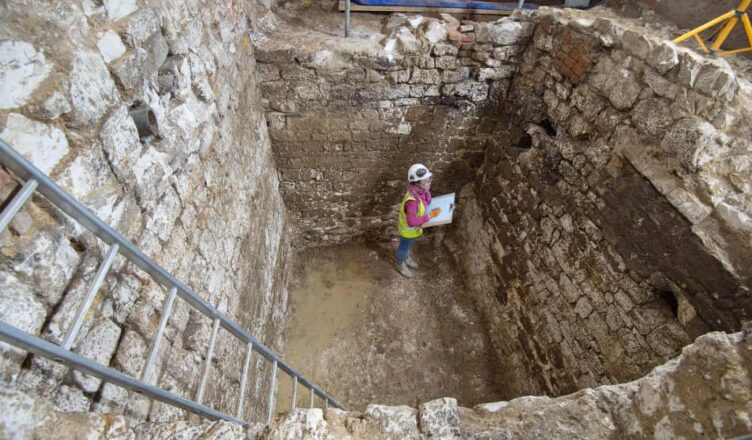 Excavation of a cesspit, almost 15 feet deep, with roughly a hundred artifacts dating back to the 14th and 15th centuries was found at the Courtauld Institute of Art in London.

This precursor to the modern toilet was coincidentally found in the exact location in which Courtauld intends to build a new toilet as part of its current renovations.

Experts from the London Archaeology Museum extended a promise to retrieve objects, including ceramic plates, wine bottles, tableware, an iron spur, a floor tile featuring designs commonly employed at palaces and monastic sites, and jewelry such as a pendant and a ring.

“We just kept going deeper and deeper. To find something of that size—and all the finds that came out of it as well—is very unusual,” MOLA archaeologist Antonietta Lerz tells the Guardian’s Dalya Alberge. “Almost every time we put our mattocks in the ground, something else came up.”

Archaeologists think the cesspit was part of the Chester Inn, a 15th-century mansion that once stood where the Somerset House, which houses the Courtauld, stands today.

During the medieval period, sumptuous estates like the Chester Inn lined the River Thames on what is now the Strand, housing bishops when they visited the English capital in service of the country’s monarch.

Unfortunately, the mansions remain poorly documented: A panoramic sketch from 1543 attempts to document the scene but is not considered very accurate, according to MOLA.

The artifacts disposed of, or accidentally dropped, in the cesspit provide new insights into the people who visited, lived and worked in the opulent medieval residence.

“It’s unusual to get excited about a cesspit, but this gargantuan piece of work is the only link we have found between medieval settlements on the Strand and the subsequent palace,” historian Simon Thurley tells the Guardian. “When its contents have been fully analyzed, we will begin to understand more about who built and used such an enormous pit. It’s an incredibly significant find.”

The pit was repurposed over the centuries, but the archaeologists found that it always included a toilet.

During the 17th century, it was partially filled in and converted into a cellar, with layers of brick flooring added over the subsequent decades. When workers placed the final layer at some point in the 18th century, they installed a latrine in the corner.

“In general, cesspits are containers for toilet waste. Toilet seats would have been located directly above it,” explains Lerz to the Guardian.

Londoners may have been sad to lose a favorite ring or ceramic dish in the wastewater, but the pit turned out to be quite the treasure trove for modern researchers.

Lerz adds, “It’s quite unusual to find so many complete or almost complete ceramics.”

MOLA researchers are still analyzing the objects recovered from the cesspit. But after both construction and artifact analysis is finished, likely around spring 2021, the Courtauld will display a selection of the items in its newly renovated building.

“This is certainly not your typical find,” says Lerz in a Courtauld statement, “and represents a fascinating glimpse into the many levels and layers of history beneath the current building.”