Did You Know? The First Anti Tank Gun Was German & Used in WWI 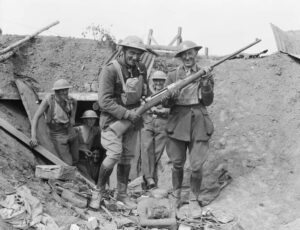 The Mauser 13 mm anti-tank rifle (German: Tankgewehr M1918, usually abbreviated T-Gewehr was the world’s first anti-tank rifle, i.e. the first rifle designed for the sole purpose of destroying armored targets and the only anti-tank rifle to see service in World War I. Approximately 15,800 were produced.

The British had first deployed tanks at the Battle of Flers–Courcelette in 1916 and were followed by the French.

The Mauser Company began mass production at Oberndorf am Neckar in May 1918. The first of these off the production lines were issued to specially raised anti-tank detachments.

The idea of using heavy caliber and high-velocity rifles as anti-tank weapons originated in Germany.

In June 1917, the German Army faced the menace of the Mark IV tank and found that the armor-piercing 7.92 mm K bullet was no longer effective.

The rifle was a single shot bolt action rifle using the Mauser action, with rounds manually loaded into the chamber.

The weapon had a pistol grip and bipod, but no method of reducing recoils, such as a soft buttpad or muzzle brake.

The iron sights were composed of a front blade and tangent rear graduated in 100-meter increments from 100 to 500 meters.

The rifle was operated by a two-man crew of a gunner and ammunition bearer, who were both trained to fire the weapon.