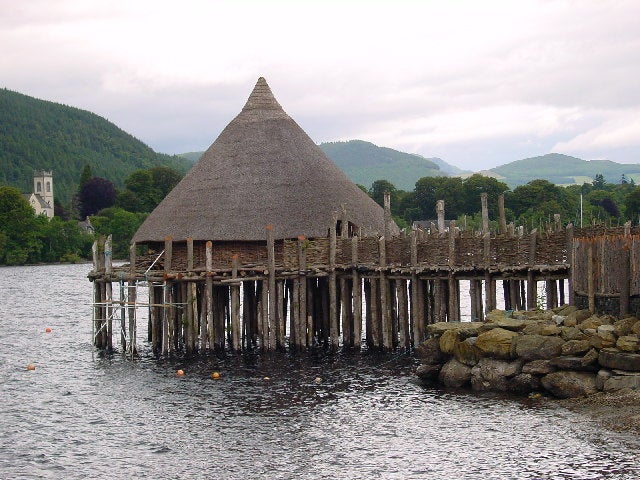 Hut In Canada Found To Be 10,000 Years Older Than Egyptian Pyramids

Generally, we think of ancient ruins as being found mostly in Europe, Africa or South America, where there are monuments and buildings that have been standing for 1000’s of years.

However, a home recently found in Canada, of all places, has been carbon-dated and the study suggests that it is even older than the pyramids. The home was found on the lakeside and was discovered on a new housing estate.

Radiocarbon testing was used on part of a wooden building that was set into the riverbed of what was once known as Monmouth’s prehistoric lake. The carbon-dating estimates that the home was built there in 2,917 BC.

This finding means that it is 2,000 years older than any other lake settlement known in England and Wales. Another interesting thing to consider is that the home was built nearly 300 years before the pyramids in Egypt.

This means that the home was built during the Neolithic or New Stone Age, suggesting that it was constructed before the invention of metalwork. The home, dubbed the Rockfield Estate, was most likely under a post-glacial lake, formed at the end of the Ice Age like most of Monmouth. The whole lake was submerged nearly 11,000 years ago.

Archaeologists and experts believe that the lake is thought to have survived the first millennium BC. The archaeologists at the scene looked at the home closer. The timber was skillfully worked on with a stone ax in order to form the bottom of a stilt. That stilt once supported the building’s structure on the lake. The remains of this ancient home were unearthed during the digging for house foundations.

The remains were so far out from the lake’s shore that the post must have been part of a building set on poles, otherwise known as a crannóg.

Crannógs are wooden structures commonly found in Ireland and Scotland which date back to the Stone Age and onwards. The only people known to use them in England and Wales was at Llangors, which is near Brecon. Crannógs are thought to have been a mark of power or status. The ones at Llangors were claimed as a royal residence by the Dark Age King of Brycheiniog.

The original timber was discovered by Martin Tuck of the Glamorgan-Gwent Archaeological Trust. The discovery of the ancient building will be in a late edition of Stephen Clarke’s The Lost Lake. Clarke also founded Monmouth Archaeology and has been digging in the area for more than half a century.

He said that this is one of the greatest prehistoric discoveries, adding that the most amazing discovery he and the other archaeologists made here was that the entire building was based on three parallel “sleeper beams.” Sleeper beams are complete trees that were set into the ground horizontally to make a building such as this. Each of the pieces of timber is a meter wide and all of them appeared to be made from full-grown trees.

Clarke also expressed that it was quite extraordinary that the entire building was made on top of a prehistoric “burn mound.” This is where the process was carried out to prepare “potboiler” stones; pebbles were burned in a fire and used to boil water when dropped into a pot or water-filled clay pit.

He said that they found four of those burn mounds on different levels of the site, suggesting that there were several separate occupations on that spot for hundreds or thousands of years.

Clarke explained that there used to be a four-kilometer-long lake that existed in that area. Archaeologists believe that the people here built boats and would have originally had access to the sea. The boats that they built would have enabled them to make long voyages.