When he noticed a bent sword, he knew it was probably prehistoric and called the Department of Culture. Archaeologists from the Univer-sity Museum of Bergen soon followed and an excavation of the find site ensued. 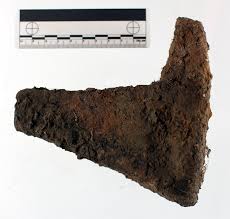 The discovery turned out to be much larger than was initially expect-ed and the old blacksmith tools were already impressive enough. 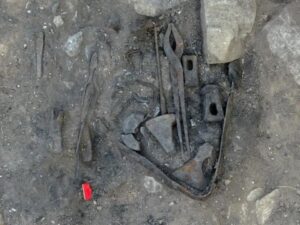 The deepest layer of excavation contained ashes, charcoal and small bone fragments. The pieces of bone haven’t been identified yet, but archaeologists believe they are human remains, likely the blacksmith owner of the marvelous tools above.

Between the ashes and bones fragments, researchers found the objects that the deceased was probably wearing when his body was cremated: beads and a bone comb. 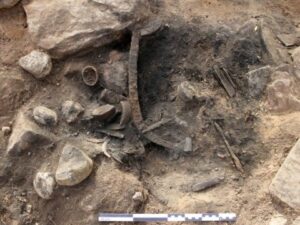 In total the excavation yielded about 60 artifacts and 150 assorted fragments. Forging tools have been found in graves before, but this is an exceptionally rich collection for a blacksmith burial. Indeed, it’s the richest burial, blacksmith or not, found in the area in years.

“We think that the blacksmiths’ contemporaries wished to show how skilful he was in his work by including such an extensive amount of objects. He might have forged many of these tools himself.”

“The grave gives the impression that this was a local blacksmith and he enjoyed a high status in his society beyond being his trade,” says [co-leader the excavation Asle Bruen] Olsen.

The design of the axe and some of the other metal objects dated them to the 8th or 9th century A.D. Subsequent radiocarbon dating confirmed the date of the burial to be around 800 A.D.

The artifacts are currently being conserved by experts at the University Museum of Bergen. Once they’re stabilized they will go on display, possibly in a dedicated exhibition.