Under a parking lot in Scotland, archaeologists discovered a Viking parliamentary site dating from the 11th century.

Excavations in the town of Dingwall uncovered a ‘Thing’ site, which is derived from the Old Norse word ping, which means assembly.

According to ‘LiveScience,’ this site, like others, was likely a gathering place for ancient Norsemen to settle legal disputes, uphold laws, and make important political decisions.

“No one’s had dating [information] from a Thing site in Scotland,” he said.

Such Thing sites are scattered from Iceland to Norway to the Shetland Islands.

Things were held mostly at open-air fields, and people only stayed temporarily, leaving relatively few archaeological traces of their presence.

O’Grady and his colleagues at The Thing Project, used historical records to find a mound near the inlet of an estuary in Dingwall that was called the moothill, or assembly mound, in the 13th century.

Later on, Scottish earls were buried there. In 1947, local authorities bulldozed the top of the mound and turned the area into a parking lot.

The team dug a small trench across the mound and used radioactive carbon isotopes, or atoms of carbon with different molecular weights, to date the charcoal found in the soil.

The team found that some of the upper layers of the soil date to the medieval period, likely when it was called the moothill, and contain shards of pottery and fragments of an iron vessel.

But below that, the team found the first layers that were used to construct the mound, with soil dating to around the 11th century. 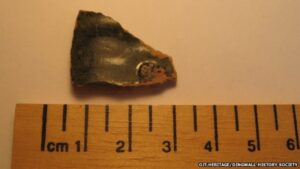 By this period of history, the Vikings were no longer feared marauders sailing the seas and raiding Europe.

Instead, the people who gathered at Dingwall were more likely subjects of Norse kings who ruled from the Orkney and Shetland Islands.