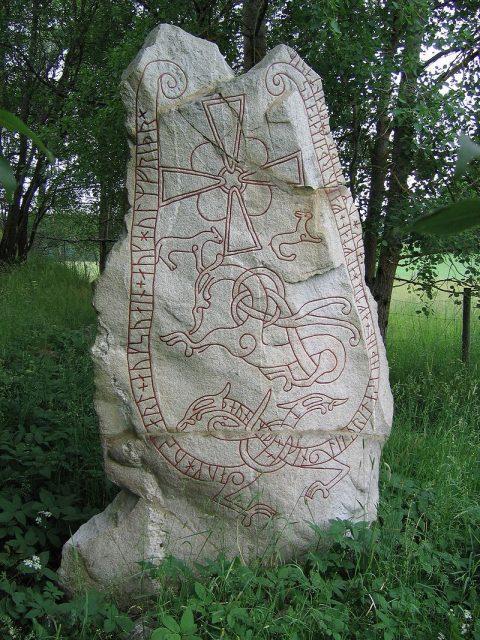 During the renovation of a stone wall outside a church north of Uppsala, a 1,000-year – old runestone was found in Sweden. Runes are Scandinavia’s oldest existing original writing works.

“We found it when the wall was broken down and put back together,” Robin Lucas, the Uppland Museum archeologist, told The Local.

“It is from the classic runestone-erecting period of the Eleventh  century.”Runes can be found all over Scandinavia, especially in Sweden’s Uppland province.

They are stones carved from anywhere from the Bronze Age to the 20th century with runic inscriptions.

But most of Sweden’s rune stones date from the end of the Viking Age, or the Eleventh century AD.

Runestones were primarily memorials to dead relatives or friends. But they should not be confused with grave markers.

The Local said 4 runes can be seen on the discovered stone – “an ua” – but most of the inscriptions are missing from the fragment. Neither word is complete, but can potentially be read as “… he was…” or “… he has become”.

This runestone stands out as unusual because it was made of limestones.“Runestones made of limestone are very rare in Uppland. Usually, granite dominates. In areas with a lot of lime stones, such as Gotland and Öland, it is more common. But limestone does exist in Uppland in small pockets, so it may very well be from around here,” said Lucas.

Only one piece of runestone made up of limestone has so far been discovered in the area, also at Lena Church many years ago. Archaeologists believe the 2 fragments come from the same stone.

The 1st fragment, which has been tentatively dated to the late Eleventh or early Twelfth century, reads “… Åsbjörn and… land. May God deceive those who failed him.”That is a curious formulation,” said Lucas in an interview.

“Most runestones are from Christian origin, just like these ones. They usually say things like ‘praise the Lord,’ so it is quite uncommon to use a stone like that to ask for vengeance.”

According to the Swedish National Heritage Board, there are about 7k runic inscriptions in the world, of which half are Viking Age runestones.

Sometimes the runic inscription is read from left to right, sometimes from right to left. The poem Hávamál, presented as a single poem in the Codex Regius, says that Odin discovered runes when he hung himself from the world tree Yggdrasil in order to learn wisdom.

He hung on the tree for 9 nights and days. Just as he was about to die, he found the runes, grabbed them, and earned his living.

A more down-to-earth explanation is that the runes were inspired by the Latin alphabet.

According to Real Scandinavia, many runestones remain where they were apparently originally placed, although others have been moved to new locations.

There is even a runestone set in the foundation of a house at the intersection of Kåkbrinken and Prästgatan in Stockholm’s Old Town, the stone having been reused as a building material in an age when its archaeological value was less appreciated than today.

The longest known runic inscription (nearly 800 characters) is found on Rökstenen (the Rök Stone) in Östergötland.

Raised in the Ninth century A.D., Rökstenen’s text begins: “In memory of Vämod stand these runes / But Varin wrote them, in memory of his dead son….”Runes continued to appear in any place, from church doors to everyday objects, through the Middle Ages and even beyond in places such as Gotland and Dalarna.