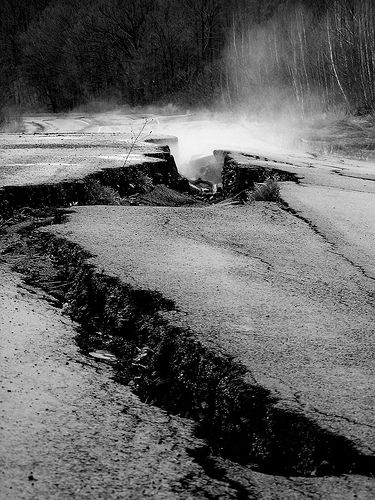 The story of Centralia, PA, is perhaps already heard, a coal-mining town with a peak of some thousand residents. Now, that population is down to 9.

It is a ghost city for one of the strangest reasons to think of – a fire began in 1962 to burn trash in a dump inadvertently spread to a coal seam underground and has simply never stopped burning.

The New latest study, released in the Bismarck Tribune on December 1, confirmed that the fire still lasts for 47 years.

The Coal Fire of Centralia

The fire, which was started by five members of the volunteer fire company when they were hired by the town council to clean up the landfill, was not properly extinguished and spread to become one of the longest burning coal fires.

According to Thinking Blog, which provides a short history of the fire, the landfill was located in an abandoned strip mine pit and as the firemen had in the past, they set the dump on fire, let it burn for a time, and then extinguished the fire, or so they thought.

It turns out the fire spread through a hole in the rock pit into an abandoned coal mine underground, where it grew in intensity. It continued to rage for years, putting the towns’ citizens at grave risk, writes Thinking Blog:

State-wide attention to the fire began to increase, culminating in 1981 when a 12-year-old boy fell into a sinkhole 45 meters deep that suddenly opened beneath his feet.

He was saved after his older cousin pulled him from the mouth of the hole before he could plunge to his probable death.

The incident brought national attention to Centralia and in 1984 U.S. Congress allocated more than $42 million for relocation efforts.

Now, a mere 9 people continue to live on the hazardous lands, while the fire is now thought to have spread to an area of over 500 acres.

Some worst-case scenario estimates fear the fire could eventually spread to an area of 3700 acres, and burn for another 100 years. Centralia’s history was the inspiration for the horror film Silent Hill.

Coal Fires Around the World

Now, the story of Centralia, while fascinating due to its intriguing narrative and dramatic history, is by no means unique. Decades-burning coal fires are unfortunately rather commonplace.

In fact, it’s estimated that a stunning 2-3% of the entire world’s industrial carbon emissions may come from uncontained coal fires in China alone–where such fires burn 20 million tons of coal a year. The Tribune explains:

Such unwanted coal fires rage or smolder in the United States, South Africa, Australia, China, India and beyond. They are burning in huge volumes in rural China and blazing in a district of India to such a great extent the flames from some surface coal fires are more than 20 feet high.

Here in the U.S., they are burning in Pennsylvania, Kentucky, Colorado, and Wyoming as you read these words.

An underground coal fire is nearly impossible to control, and since many other materials are burned along with the coal, large amounts of other greenhouse gases like methane are released as well. Such fires have raged for decades–and are still raging–in Colorado and Pennsylvania.

Coal fires have been called a ‘global catastrophe’, and for good reason. The worlds worst are thought to be in China, India, and Indonesia, but obviously, they’re endemic wherever coal stores are found.

Technology is slowly being developed to aid the fight in extinguishing the coal fires–let’s hope it’s ready sooner rather than later, as these fires are atrocious polluters and unnecessary danger to human life.