Lt John Kriegshauser, a 23-year-old American pilot, found himself in grave danger shortly before 5 p.m. on February 22, 1944: his-17 Flying Fortress, nicknamed’ Mi Amigo,’ had been severely damaged by enemy fighters over Nazi-occupied Denmark and, struggling back to base in Northamptonshire, was in urgent need of landing somewhere. Below him was Sheffield’s busy city.

With the aircraft’s engines fading fast, Lt Kriegshauser realized he would need to crash-land – in Endcliffe Park, where a group of schoolchildren was gathered Narrowly avoiding the children, as well as nearby houses and roads, Lt Kriegshauser crashed into mature woodland in the park.

Smashing into a hillside, the aircraft exploded, killing all 10 airmen on board.No civilians on the ground were injured or killed. Had it not been for Lt Kriegshauser’s consummate skill – for which he was posthumously awarded the US Distinguished Flying Cross – it is assumed the death toll would have been considerably higher.

Paul Allonby, author of Courage Above the Clouds: the true heroic story of the crew of B-17 ‘Mi Amigo’, explains that the US bomber had been part of a daylight operation by aircraft from the 305th Bombardment Group, US 8th Army Air Force, based at Chelveston Airfield, Northamptonshire, to bomb the Luftwaffe military air base located at Aalborg in Nazi-occupied Denmark.

On 20 February 1944, the 305 was selected to take part in a raid involving 700 aircraft to Leipzig, Germany, as part of a week-long joint campaign code-named Operation Argument, “which involved US bombers attacking by day, and Royal Air Force bombers striking by night,” writes Allonby.

“The aim was to attack the Nazi aviation industry, and Luftwaffe bases.”Known as the ‘Big Week’, Operation Argument was one of the most critical periods of the entire war, says military historian James Holland.

Germany lost significant numbers of Luftwaffe fighters and pilots but on 22 February, things did not go to plan – the military air base at Aalborg was covered by fog and so could not be pinpointed, and the group of planes soon found itself under attack by German enemy fighters. Three B-17s in the formation were shot down, with most crew members being killed and the others captured as prisoners of war.

The mission was aborted and the surviving aircraft began their journey home to England, jettisoning their bombs over the North Sea en route (‘Mi Amigo’ was carrying a total bomb load of 4,000 lbs). ‘Mi Amigo’ had been badly damaged in the attack.

Looking for a place to land

“He began to descend cautiously, and suddenly came out through the clouds low over a major city – Sheffield, in South Yorkshire. Ahead were houses, roads, trees and a splash of green: Endcliffe Park, a public play area, complete with a river, woods and a bandstand.

“As Lt Kriegshauser used every bit of his skill and experience, at least one engine began to cut out. Seeing only the grassed area of the park ahead, a split-second decision was needed.”

Moments after ‘Mi Amigo’ crash-landed in Endcliffe Park, firemen hurried to the scene to find trees uprooted and crushed beneath the destroyed bomber, with wreckage strewn across the hillside.

The aircraft had split into two and the front section was on fire, says Allonby. Around 20 firefighters fought for more than an hour to put out the blaze. 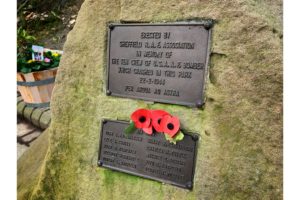 The 10 airmen killed in the ‘Mi Amigo’ crash were:

Three of the men are buried in the UK – Harry Estabrooks, Charles Tuttle, and Maurice Robbins – at the Cambridge American Cemetery. The remains of the other seven crewmen were returned home after the war.

The first memorial service for the ‘Mi Amigo’ airmen was held in 1969 and there has since been an annual commemoration.

A memorial stone surrounded by 10 oak trees was planted in 1969 to commemorate the 10 airmen killed in the crash.