The only unsolved skyjacking case in U.S. history might have a break: “D. B. Cooper” is Robert Rackstraw, a Vietnam vet and ex-CIA operative, investigative team claims

On November 24, 1971, a man approached Northwest Orient Airlines ‘ flight counter on a rainy afternoon in Portland, Oregon. He was wearing a dark raincoat, a dark suit with a skinny black tie, a white shirt purely pressed, and loafers. He appeared to be almost six feet tall in his forties, with hair receding. “He looked like an executive of the business,” said witnesses later. 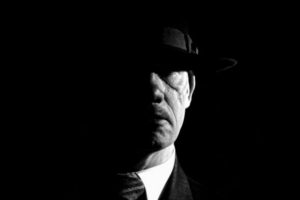 Using the name Dan Cooper, he used cash to purchase a one-way ticket to Seattle on Flight 305. The man, who carried a black attache case, sat in the last row of the Boeing 727 for the 30-minute flight, seat 18-C, ordered a bourbon and soda.

After the plane took off, he handed an attractive flight attendant a note, which she slipped in her pocket and ignored. A bit later, when the flight attendant passed by him, the man leaned toward her and whispered, “Miss, you’d better look at that note. I have a bomb.”With that, the legend of D. B. Cooper was born. Hours later, in the Seattle-Tacoma airport, Cooper, now wearing sunglasses, boarded a second plane empty of passengers and with only a flight crew.

After he showed the flight attendant on the first plane the bomb in his attache case and she conveyed the note’s contents to the pilot, his instructions had been followed.He now had four parachutes and a briefcase containing $200,000 in $20 bills. (What he did not know was that while the plane circled the Seattle airport, FBI agents photographed the money.) It was now night time, and rain was getting heavier.

The man had more detailed orders to be followed: the plane would follow a southeast course to Mexico City at the minimum airspeed possible at a maximum 10,000 foot altitude. The landing gear would have to remain deployed during takeoff and the cabin be depressurized. As with all of his communications, he was quite polite.

According to the FBI document on the case: “Somewhere between Seattle and Reno, a little after 8:00 p.m., the hijacker did the incredible: he jumped out of the back of the plane with a parachute and the ransom money.” Two aircraft from a nearby air force base had been following the airliner, but saw nothing.

Extensive searches on the ground found no trace of Cooper, his parachute, or the money. The FBI says, “Calling it NORJAK, for Northwest Hijacking, we interviewed hundreds of people, tracked leads across the nation, and scoured the aircraft for evidence. By the five-year anniversary of the hijacking, we’d considered more than 800 suspects and eliminated all but two dozen from consideration.”It is one of the greatest unsolved mysteries in FBI history.

Despite theories put forth in books, documentaries, symposiums, and an enthusiastic website, no one has proven the identity of D. B. Cooper (a journalist mistakenly turned “Dan” into “D.B.” and it stuck). None of the photographed money turned up until 1980, when a boy found three packets of the ransom cash in a stream near Vancouver, Washington.

One of the most widely believed theories was that Cooper died in his audacious jump from the plane. He had a parachute that couldn’t be steered, he jumped at night into a heavily wooded area, in the rain, in clothes certainly not practical for such an act. On July 8, 2016, the FBI announced that it had “redirected resources allocated to the D.B. Cooper case in order to focus on other investigative priorities.”

But in late January 2018 a startling claim was made to the media: D. B. Cooper was actually a former CIA operative named Robert Rackstraw, alive and well and living in Southern California.

A team of private investigators hired by TV producer Tom Colbert that has been working on the mystery for several years said they cracked a code proving the infamous hijacker is, in fact, a man who has ties to the San Diego area named Robert Rackstraw, and he is still alive.

Rackstraw is a decorated Vietnam War veteran and, according to the investigators, an ex-CIA operative.

The code was contained in a Dec. 11, 1971, letter the cold-case team got their hands on that they say was sent by “D. B. Cooper” to several major news outlets. The taunting letter, which the newspapers did not publish at the time and officials said were a prank, was obtained through the Freedom of Information Act.

“The letter, which went to The New York Times, the Los Angeles Times, The Seattle Times and The Washington Post, contains strings of letters and numbers at the bottom of the page,” according to the Seattle Times. A code breaker on Colbert’s team, Rick Sherwood, was able to decode the letters and numbers, and he said they pointed to the three Army units Rackstraw was connected to between 1969 in 1970 when he was in Vietnam.

The encryption was meant to serve as a signal to those in his units who knew the code that he was alive and well after the jump, Colbert said. He also taunted law enforcement by including “SWS” in the letter, which stands for “Special Warfare School.”

In addition to claiming to have found the real D.B. Cooper, Colbert said he has strong evidence that the FBI deliberately worked to keep the hijacking case unsolved —due to Rackstraw’s CIA ties.

Although his CIA employment is not confirmed, Rackstraw, 74,  was not an angel by any definition. He was charged with murdering his stepfather but acquitted in a trial in 1978.

He once reportedly tried to fake his own death by using a Mayday call and bailing out of a rented plane–it quickly unraveled. He was even arrested in Iran and deported back to the United States, which certainly doesn’t happen every day. According to the Washington Post, “he faced charges of aircraft theft, possession of explosives and check fraud … Colbert said Rackstraw was convicted and spent more than a year in jail before being released in 1980.

Rackstraw’s attorney said he couldn’t confirm those details.” Those who feel that D. B. Cooper was a polite mastermind who behaved like a business executive are unconvinced that Rackstraw, who hit lists of possible Coopers in the late 1970s, was this man.

When tracked down recently by a TV crew, Rackstraw, when asked if he were the real D. B. Cooper said, “What difference would it make?” Rackstraw’s attorney has said that he denies any part in the skyjacking.

He was 28 at the time of the skyjacking, and one of the original flight attendants, when shown photos of Rackstraw, said he did not resemble the man she saw on the plane in 1971. In a press conference in front of FBI headquarters in Washington, D.C., Colbert said, “The FBI may hold the strings, but Rackstraw holds the ripcord. And thanks to his coded bragging, it’s now been pulled. We’ll be waiting for him at the drop zone.”