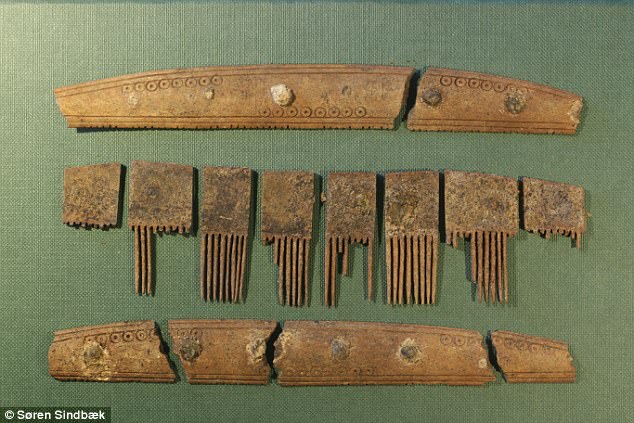 An ancient comb and plate engraved with mysterious early runic inscriptions by Vikings more than 1,200 years ago have been found by researchers.

The comb was found during excavations of a Viking Age marketplace in Denmark’s oldest town Ribe.

The comb had an inscription of the runic word for ‘comb,’ while the plate, made of bone or antler, may have been inscribed with a Viking name: Tobi.

The discoveries are significant because few runic texts from this period exist when runes changed drastically and a new alphabet began to be used.

The archaeologists who made the discovery are keen to find out whether the runes on the comb and plate were the new alphabet, which began to be used at the beginning of the Viking age in AD 800 (1,200 years ago).

The discovery of the 2 new artifacts doubles the number of runes from Ribe.

‘These are the runes we have been missing,’ Søren Sindbæk, an archaeologist and the excavation leader from Aarhus University, Denmark, told ScienceNordic.

‘We have waited for generations to be able to dig into this.’

Archaeologists do not have the evidence to know how written and spoken language was during this time, and what Vikings used the runes for.

According to Sindbæk, the artifacts are from a period where runes changed a lot, and the discovery expands specialists’ ‘ understanding of the different uses they had.

It could have been used as a tool to label property for traders, or for sending messages over a long distance or even to summon gods.

Sindbæk first discovered the plate when he was excavating a small house, but he could not figure out what the markings were at first.

It was difficult to decipher the marking in the beginning because both ends were missing.

In addition, the text lacked certain features which mark the beginning and end of a word.

Before the new runic came into use, the Vikings used a more complicated alphabet called the 24 character futhark – a combination of the first 6 letters of its alphabet.

According to the researchers, the alphabet was built up so each rune had its own name and indicated the sound, However, as the language developed, these names and sounds changed too, and it became too hard to remember the sound of each rune and there was too much uncertainty in the message conveyed.

Eventually, the Vikings decided not to use the old system anymore, and a new alphabet came into use, as revealed by Viking rune stones.