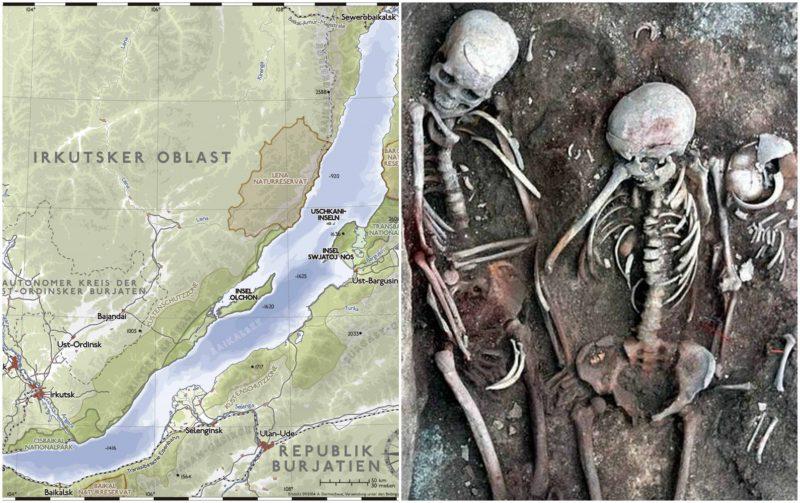 The archeologists in Siberia have discovered the remains of a romantic couple from a dig.

The researchers have unearthed the Bronze Age grave containing remains of a loving couple, which have been buried for over five millennia holding hands.

The couple was presumably decorated with extraordinary rings made of rare white jade and other ornaments during their burial ritual; one item was placed in the male’s eye sockets.

The bodies were found in an old grave overlooking the famous Lake Baikal in Siberia.

The researchers believed the remains belong to an ancient dignitary and his younger wife or perhaps his concubine whom he was immensely in love with.

Russian archaeologists working on the grave site have yet to reveal the details of the metal implements found in a small leather pouch that was between the kneecaps of the man.

On the chest of the man lied a jade ring, while a dagger also made out of jade was found lying beside the bodies.

According to the researchers, the remains belong to the high-born dignitaries of Glazkov Culture, who lived around the Baikal, which is considered as the oldest and the deepest lake in the world.

Dmitry Kichigin, an archaeologist at Irkutsk National Research Technical University, explained that the grave artifact phenomenon in the ancient cultures has been widely accepted as a religious offering; an offering that was to be made in order to facilitate the dead in the afterlife.

The rings found in the grave of the lovers in Siberia says Dmitry Kichigin, undoubtedly represent some kind of afterlife ritual.

Dr. Kichigin went on to explain the find saying that the remains were discovered lying on their backs, and the heads were facing west, the skeletons were found holding hands suggesting an intimate connection between the male and the female.

He added that the researchers are currently working to establish the real purpose of the jade knives found near the female body.

Kichigin said that the knives are a new development in Glazkov culture’s grave sites discovered so far.

Talking about the condition of the remains Kichigin said the male skeleton is relatively in a better condition as compared to the female’s remains; the upper half of the female skeleton had been eaten away presumably by the rodents.

The burial site discovered is located in a very religiously significant location; the region near the lake is long believed to have possessed immense religious significance for the ancient people.

The site is also the home of a number of Neolithic remains discovered in the past by the archaeologists.

The authorities have taken strict measures to keep the location of the discoveries hidden in order to avoid any ransacking of the sites by the treasure hunters.

While speaking to The Siberian Times, the archaeologists working at the site have ensured that their excavation of the site is expected to reveal more hidden facts about the ancient people who inhabited the region 1000’s of years ago.