Today many peoples are concerned that their job or profession will become obsolete due to changing technology.

In you go back to the Middle Age you can find several occupations – some that involved a great deal of learning, and other that were a choice only for the desperate – that have disappeared.

Many of these were also made redundant by technology. Here are top ten of these jobs.

One of the main ‘scientific’ beliefs through out the medieval world was that it was possible to change chemical and metals.

Scholar experimented with various processes and techniques to purify metals and convert them into new forms.

One particular goal of medieval alchemist was to turn lead into gold or silver, but for others the objective was to create medicine to heal or sustain the human body.

Some of the leading scholars of the Middle Age dabbled in alchemy, including Albertus Magnus and Roger Bacon, but by the 17 th century the ideas behind alchemy were gradually dismissed, and the science of chemistry replaced it.

In medieval England, the profession of brewing was often dominated by women. In town and villages women could be found running side-businesses in brewing and selling ale.

Because ale soured quickly and transported poorly, it was unsuitable for large-scale, centralized business. As a result, wives who sought to sell ale on a modest and ad hoc basis could compete effectively in the trade.”

By the fifteenth century this practice began to fade, as brewing became more commercialized and society sought to restrict the independence of women.

An important position in many royal court was to be the person that served the monarch their drinks.

It was widely feared that one could easily be poisoned, so this person was responsible for making sure the drink were safe, even if that meant tasting the beverages themselve.

A king needed to be very trusting of his Cup Bearer, so the person with this jobs could be very influential in court politics. 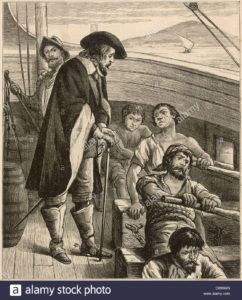 Perhaps the most gruelling job in the Middle Age was to work on a galley, where teams of men would row the ship. Vessels could have up to a thousand crewmen, where they propelled the vessels at a much faster rate than by relying on sail.

Benjamin Arbel, in A Companion to Venetian History, 1400-1797, notes how the Republic forced its subject in places like Crete and Cyprus to take on these job.

Arbel explains that “a galley rower was one of the most detested obligation among Venice’s colonial subjects, and they tried to avoid it all possible manners, including becoming priests, which freed them from this burdensome obligations.

Under such circumstances the burden was largely borne by poor peasants would could not afford to buy an exemption from this services.” As it became even more difficult to find people willing to take on this jobs, galley owners had to rely on slaves to be rowers. 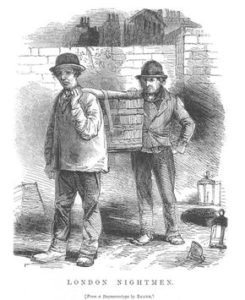 Until the inventions of modern sewers and plumbing, human waste was usually deposited into a privy or cesspit.

They periodically needed to be cleaned out, and that was what the Gong Farmers was paid to do. Using a large ladle, they would scoop out the waste and then transport it away. 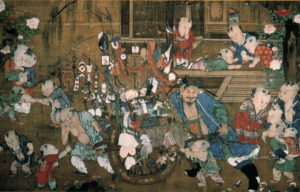 This type of businessman has not quite disappeared, but it is rare to find an itinerant merchant who travels the countryside to sell various goods.

In the Middle Age this would have been a common practice to go from village to village, serving as a economic lifeline to more remote place.

However, those who were involved in this trade were often viewed with suspicion by local, and sometimes accused of being criminals. 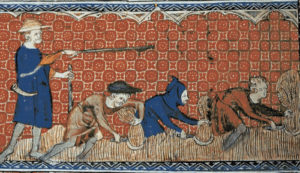 In Geoffrey Chaucer’s The Canterbury Tales, one of the main character is Oswald, who works as a Reeve, or the manager of an estate.

This was a position that went back to Anglo Saxon times, serving as a local administrator. After the Norman Conquest, it became the person on a manor who oversaw its day-to-day running and handled any minor disputes between the peasantry.

The reeve himself was also a peasant, chosen by the lord or elected by his neighbour, to serve for a one-year period. As the feudal system declined, so did this position, but you can find some local officials in Canada who bear the title of reeve. 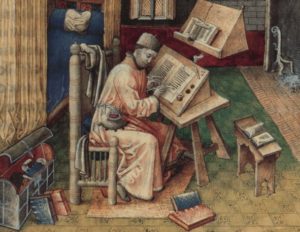 In places where literacy was not common, peoples had to be hired to write all sorts of documents, from letters to business contracts.

A more in depth job was to copy a manuscript, a process that could take months. Men and womens at monasteries often took up this role, but in the cities the ability to write was a skill that had much values.

Today one can find people partaking in this ceremonial role, but amid the Middle Ages this could be an important position, as it served as the most direct way for local authorities to communicate with their communities.

In medieval England, these men could be heard calling out “Oyez, Oyez, Oyez!” (Anglo-Norman for Listen), a term that evolved to become “Hear ye”.

The town crier could be used to read out royal proclamation, local laws, the start of events, or even to note the punishment of criminals. 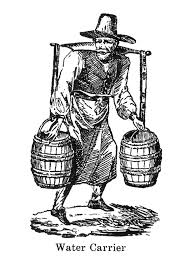 In a medieval city the water supply was not distributed evenly – if you were close to a river or a well then it would be fairly easy way to get your own water, but others would have to make a daily chore out of drawing water and bringing it back home.

It is not surprising that enterprising young men looked for work by doing this tasks, and in late medieval London there was enough of these “cobs” that they created their own fraternity.