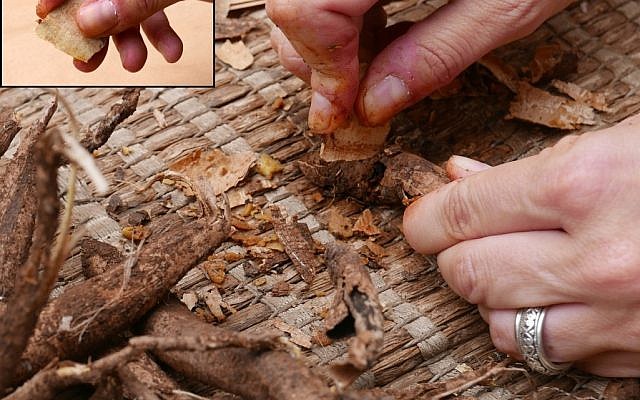 Approximately 400,000 years ago, members of a prehistoric startup nation living in a cave near Tel Aviv discovered innovative ways of upcycling, using flint tools to better suck the marrow out of life.

According to the author of the recent study in the Journal of Human Evolution, Tel Aviv University Prof. Ran Barkai, his team’s research shows that a rare, unknown human species from the Late Lower Paleolithic era was capable of pre-planning a new “tool kit” that enabled them to make use of all the natural resources at their disposal and thrive for another 200,000 years.

Until recently, said Barkai, recycling was “an unstudied aspect of ancient human behavior.” Recent research has found, however, that 10 percent or more of all tools at the Qesem Cave were refashioned and reused with an intentional plan that would allow the early people to more efficiently make use of meat, tubers and other matter excavated at the site.

Through a combination of use-wear and residue analyses, Barkai and fellow Tel Aviv University archaeologists Flavia Venditti, Yoni Parush, and Avi Gopher teamed up with Stella Nunziante-Cesaro from “Sapienza” Universita di Roma to analyze 609 recycled small flint items taken from three discrete areas of the Qesem Cave. Their results were recently published in a peer-reviewed paper, “Recycling for a purpose in the late Lower Paleolithic Levant.”

“We used microscopic and chemical analyses to discover that these small and sharp recycled tools were specifically produced to process animal resources like meat, hide, fat and bones… We also found evidence of plant and tuber processing, which demonstrated that they were also part of the hominids’ diet and subsistence strategies,” said post-doctoral student Venditti, the lead author on the study, in a press release.

“The meticulous analysis we conducted allowed us to demonstrate that the small recycled flakes were used in tandem with other types of utensils. They therefore constituted a larger, more diversified tool kit in which each tool was designed for specific objectives,” said Venditti.

Previous excavations at other caves had discounted the flakes as insignificant byproducts to working flint. The new paper, however, concludes that the 609 recycled flakes were “conceived to fulfill tasks already visualized prior to the knapping procedures. This ability of the cave’s inhabitants to anticipate their needs and diversify their toolkit accordingly demonstrates a high level of cognitive complexity.”

Discovered during salvage excavations in 2000, the Qesem Cave is located 13 kilometers outside of Tel Aviv and shows continual habitation for 200,000 years. Its residents, a species of early people, documented by 13 human teeth found in the cave in 2011, were genetically and behaviorally different from their Homo erectus ancestors, and similar to both modern humans and Neanderthals.

“They represent a stage of human evolution between Homo erectus and Homo sapiens and Neanderthals,” said Barkai. “They were capable of using all the natural resources to their benefit.” Previous research has shown the cave dwellers ate a varied diet, which included turtles.

“In our study we suggest the recycle items were used to butcher smaller animals and make the best out of the hunt. They made precise and delicate cuts — to make use of every possible piece of meat and fat,” said Barkai.

According to the paper, “The combination of macro- and microwear along with the analysis of residues show that small flakes were used mainly for the processing of animal materials.

Plant and vegetal processing were also identified, but to a lesser extent… Our integrated use-wear and chemical analysis showed that the small flakes at Qesem Cave were produced mainly to exploit animal resources, which comprise 44% of the worked materials in the three analyzed areas.”

In addition to the discovery of widespread recycling of tools, the analysis of the flint taken from the rock shelf, the central hearth area, and the area south of the hearth also showed that each area served different functional and sociological purposes.

According to Barkai, the long-term use of the cave is an indication that this early human species adapted in the face of adversity. Following the disappearance of the prehistoric elephant, the previous main food source of the region, the early humans who lived in Qesem Cave would have had to scramble to survive and were in many ways more capable that humans today, he said. It was a change as significant as taking away whales from the diet of the Inuit.

“There was no Rami Levy,” the ubiquitous Israeli supermarket chain. joked Barkai  in conversation with The Times of Israel.

Earlier studies showed the people made habitual use of fire to cook food and generated other innovations following the “significant challenge” of the disappearance of elephants and the need to hunt smaller animals, such as the Persian and Red deer, whose bones were discovered in the cave.

As stated in the paper, “Our results demonstrate the ingenuity and resourcefulness of these early human groups in the Levant that had to adapt to the changing conditions in order to survive and thrive.”