This Man Was Killed by Brutal Boomerang Blow 800 Years Ago

Since analyzing markings of an 800-year-old fossil, Australian anthropologists have found evidence that its owner has been killed in a vicious boomerang attack.

Boomerangs are popular hunting weapons used by the Aborigine and Torres Strait Islanders, however, the latest findings indicate they may still be used for warfare well in advance of the arrival of European settlers in Australia.

The findings give a rare insight into pre-colonial, intertribal disputes, which have, rather than archeological facts, been based on historical accounts for a long time.

“I don’t know if it was a continent-wide phenomenon, but we do see evidence in this part of [Australia] that … supports intertribal conflict,” team member Michael Westaway from Griffith University told Traci Watson at National Geographic.

The skeleton is thought to have belonged to a 20- to 30-year-old Aboriginal male, who locals have named Kaakutja (meaning “older brother” in Baakantji). It was discovered in 2014 in Toorale National Park in eastern Australia.

Looking at the long wound on the dead man’s skull, researchers originally thought he died from a sword strike by a member of the British Native Police – a task force responsible for the deaths of many Aboriginals in the 1800s.

Two years later, further analysis of the remains suggest that the man actually died in the 1200s – about 600 years before Europeans arrived.

After further investigation, the team found a nearby cave that contained Aboriginal paintings of warriors with shields, clubs, and boomerangs, reports Watson. They then compared the gash wound on the man’s skull to the average size of a boomerang, and showed that the two matched up. 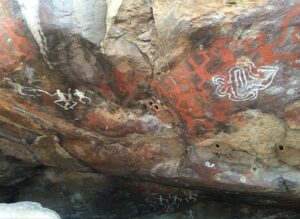 Besides the gash, the man was also found have broken ribs and a partially severed arm, Bob Yirka reports for Phys.org, which suggests that he was a long-time fighter, who had survived many battles before his death.

During Kaakutja’s time, boomerangs were a commonly used for a number of tasks, such as digging, hunting, and – based on these findings – combat.

Contrary to the image of boomerang combat that most of us probably have in our minds – with two combatants standing far away from each other, lobbing boomerangs at range – the team says they were probably used for close combat, likely thrown around a shield, allowing warriors to smack guarded foes without revealing themselves.

While understanding how boomerangs were used as weapons is an important find in itself, the team says this is important evidence to suggest that Aboriginal and Torres Strait Islander people used to fight intertribal conflicts before European colonisation.

“There are those who think [pre-colonial Australia] is the Garden of Eden, and those who say it’s a hostile place,” Jo McDonald from the University of Western Australia, who wasn’t involved in the study, told National Geographic. “The evidence here is that it’s kind of both.”

With further analysis of Kaakutja’s remains, the team hopes to find more clues about tribal relations in pre-colonial Australia.