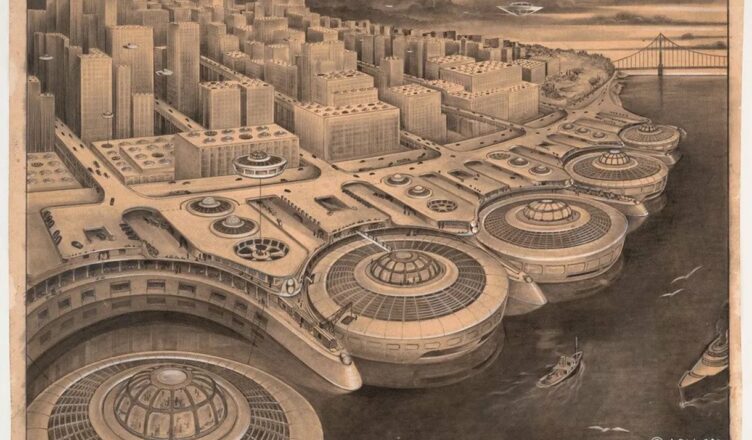 This is what San Francisco was supposed to look like, according to 1950 drawing

Maybe San Francisco Planning was too tough for architects. After all, were it not for the department’s rigidity, the city could have looked like this.

Posted last week on Reddit, a 1950 rendering of San Francisco’s cityscape by Alexander Weygers, an urban designer and artist who doubled as an Aerospace engineer, captured the imagination and wit of a few Redditors.

“I love how saucers abound and yet the boats still have smokestacks,” quipped RSwordsman. While GalaxyKong points out, “They look like ocean Roombas.”

And indeed they do resemble the popular automatic roving vacuums. However, these circular doohickeys were actually conceived and christened by Weygers as Discopters.

According to a site dedicated to Weygers, here is how the artist came up with his flying machines, which could’ve been but never were.

In 1945 America had just emerged from World War II. A conventional fixed-wing aircraft was still the most sophisticated flying machine of the time.

In the summer of that year, a ship engineer/sculptor named Alexander Weygers received confirmation of a patent for his 18-year-old dream: “The Discopter.” Two years before the term “flying saucer” was ever used, Weygers vision gave a glimpse into the future as compelling then as it is today.

“They told me I was too far ahead of my time, but I thought an inventor always is, isn’t he?… It must have been 1927 when the idea came to me.

I was working as a draftsman and we had been talking about propellers.

It seemed to me the helicopter was an unfinished piece of engineering. You cannot just lift it up. It must move like a pendulum, which makes it very limited in use.”

And while this vision of San Francisco’s future never came to fruition—at least not yet—the upcoming Chase Center in Mission Bay does look a touch like one Weygers’ circular structures if you squint hard enough.