This 2,400-year-old mushroom is the largest living organism on the planet

You will be hard-pressed to notice it while walking through the Malheur National Forest in eastern Oregon.

But 2,200 acres are now covered by a fungus spreading through the roots of trees, making it the largest living organism ever discovered.

The Armillaria ostoyae, popularly known as the honey mushroom, started from a single spore too small to see without a microscope and has been weaving its black shoestring filaments for an estimated 2,400 years through the forest, destroying trees as it grows.

“You don’t notice the pattern when you’re on the ground, you just see dead trees in clusters,” said Tina Dreisbach, a botanist and mycologist with the U.S.

The outline of the giant fungus, strikingly similar to a mushroom, stretches 3.5 miles across, and extends an average of three feet into the ground. It covers an area as big as 1,665 football fields. No one has estimated its weight. 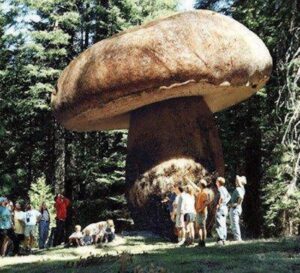 “There hasn’t been anything measured with any scientific technique that has shown any plant or animal to be larger than this,” said Gregory Filip, associate professor of integrated forest protection at Oregon State University and an expert in Armillaria.

Until now, the largest known organism was another Armillaria ostoyae found in 1992 in Washington State. It covered 1,500 acres near Mount Adams.

“We just decided to go out looking for one bigger than the last claim,” Filip said.

Forest Service scientists are interested in learning to control Armillaria because it kills trees, Filip said, but they also realize the fungus has served a purpose in nature for millions of years.

The discovery came after Catherine Parks, a scientist at the Pacific Northwest Research Station in La Grande, Ore., in 1998 heard about a big tree die-off from root rot in the forest east of Prairie City, Ore.

Using aerial photos, Parks staked out an area of dying trees and collected root samples from 112.

She identified the fungus through DNA testing. Then, by comparing cultures of the fungus grown from the 112 samples, she determined that 61 were from the same organism, meaning a single fungus had grown bigger than anything anyone had ever described before.

On the surface, the only evidence of the fungus are clumps of golden mushrooms that pop up in the fall with the rain.

“They are edible, but they don’t taste the best,” said Dreisbach. “I would put lots of butter and garlic on them.”

Digging into the roots of an affected tree, something that looks like white latex paint can be seen. These are mats of mycelium, which draw water and carbohydrates from the tree to feed the fungus and interfere with the tree’s absorption of water and nutrients.

The black shoestring filaments called rhizomorphs stretch as much as 10 feet into the soil, invading tree roots through a combination of pressure and enzyme action.

The huge size of the fungus may be related to the dry climate in eastern Oregon, Dreisbach said Friday.

Spores have a hard time establishing new organisms, making room for the old-timers to spread.