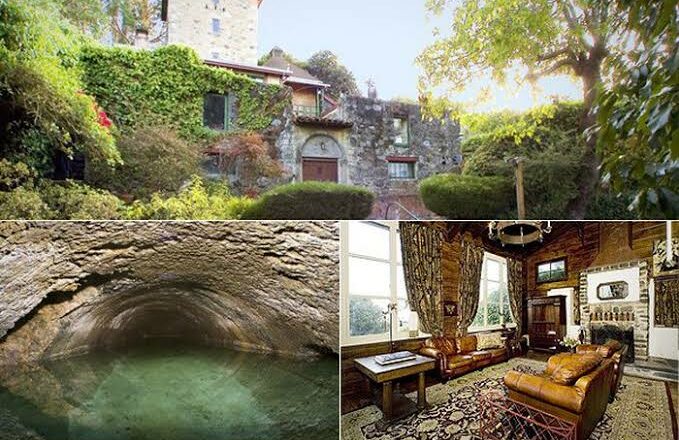 Despite its long history and six-story stone tower, most residents of San Francisco, even those that pass by it daily, have no idea that Albion Castle exists.

Built-in 1870 by John Hamlin Burnell, a young English immigrant with plans for a brewery to supply the over 800 saloons serving the growing city.

Beer was already a popular choice in San Francisco, with several local breweries already competing for business. But Burnell’s new property had a secret advantage: An underground aquifer that provided pure cold water, perfect for brewing – not to mention free.

He built himself not only the workspaces for the Albion Porter & Ale Brewery but also a castle home.

Although relatively petite and built into a hillside, it features a distinctive tower built from stones pulled from cargo ship’s ballast, modeled after Norman fortifications Burnell loved back home.

Under the castle, Burnell dug out two stone cisterns, each capturing 8,000 to 10,000 gallons of spring water per day. The 200-foot pools are accessed by a cave entrance, and still, provide fresh clean water today.

Burnell built his unusual brewery on land on the outskirts of the city then managed by the Hunter brothers. Now known as Hunter’s Point, it was the site of a huge Naval shipbuilding yard for decades, now a rough-edged neighborhood. The property has changed hands many times and had several incarnations over the years.

After the 18th amendment (Prohibition) forced the brewery to close down in 1919, the property was reborn as the Albion Water Company, providing bottled drinking water from the underground cisterns from 1928 to 1947.

In 1938, the castle was bought by the sculptor Adrian Voisin who remodeled the living area, adding much of the woodwork and medieval-inspired interior that is there today. He lived and worked there for some twenty years.

In 1961 the castle was nearly the victim of a highway construction scheme that planned to bulldoze the building, but it was saved based on the argument that the freshwater source under the building “could be the only non-contaminated source of freshwater in the event of a nuclear attack.” (According to the San Francisco Chronicle at the time)

Over the years, the nearby Naval shipyards complained about the inconvenient proximity of a freshwater source so close to their highly hazardous undertakings.

In 1998 the property was sold to another artist, this time sculptor Eric Higgs, also known as one of the founders of CitySearch.

Until 2005 the castle was used as a residence, art studio, and occasional party location, then it was sold at auction for $2.1 million dollars.

The purchasers, local brewers and castle fanciers from Napa county, intended to revitalize the space and re-launch the historic Albion Brewery. Although some renovations to the property and interior have been made, the brewery never materialized.

As of January 2010, the property is once again listed for sale, ready for its next incarnation. Yours for just $2.9 million.