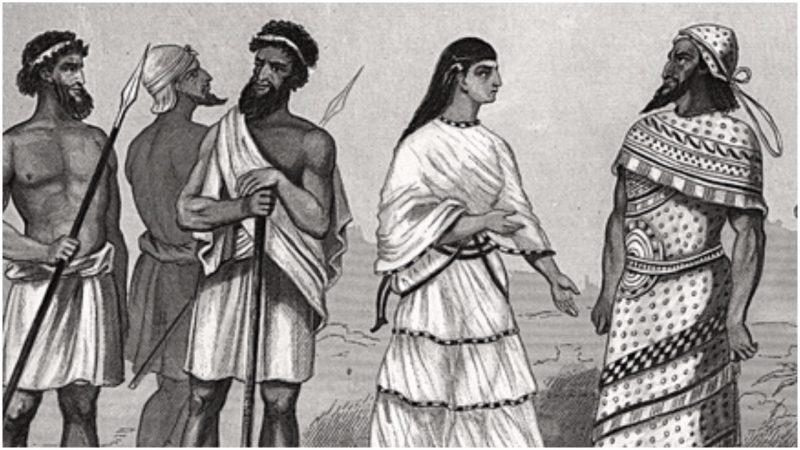 Among the many theories about which civilization first sailed to the Americas and discovered them, there is also the theory that the ancient Phoenicians were the first. This theory became popular in the 18th century and is closely connected with the petroglyphs on Dighton Rock which are still of unknown origin.

This theory isn’t as popular as the one that says the Norse first made the discovery, but it’s worth mentioning. A lot of scholars began offering ideas about the true origin of the inscriptions on the rock back in the 18th century. Yale College’s seventh president, Ezra Stiles, a theologian, author, claimed the inscriptions were in Hebrew.

Antoine Court de Gébelin, who is mainly known for the popularization of the Tarot, had his own idea about the rock. He believed that the inscription was made by Carthaginian sailors who commemorated their journey to the shores of Massachusetts.

In the 19th century, the theory that a group of Israelite people visited the New World was widely adopted in the Mormon community. Later, Ross T. Christensen, an American archeologist, speculated that the Mulekites, who are mentioned in the Book of Mormon, were probably of Phoenician ethnic origin. The Phoenician theory is also supported in a book written in 1871, by John Denison Baldwin, an American anthropologist.

In Ancient America, Baldwin wrote, “The known enterprise of the Phoenician race, and this so variedly expressed ancient knowledge of America, strongly encourage the hypothesis that the people called Phoenicians came to this continent, established colonies in the region where ruined cities are found, and filled it with civilized life.

It is argued that they made voyages on the ‘great exterior ocean,’ and that such navigators must have crossed the Atlantic; and it is added that symbolic devices similar to those of the Phoenicians are found in the American ruins, and that an old tradition of the native Mexicans and Central Americans described the first civilizers as ‘bearded white men,’ who ‘came from the East in ships’.

“A stone tablet with an inscription that was supposed to be of Phoenician origin appeared in Brazil in the 1870s. The tablet was given to Ladislau de Souza Mello Netto, who was the director of the National Museum of Brazil at that time, and he immediately acknowledged the artifact as genuine.

The inscription allegedly told the story of some Sidonian Canaanites who visited the shore of Brazil. It was later found that the symbols that appear on the tablet were variations of letters that appeared in different periods over a span of 800 years. It was impossible for all the letters to appear on the same tablet at the same time, so the artifact and the inscription were dismissed as fake.

A few new artifacts appeared in the 20th century, which again spiked Phoenician or Semitic discovery theory. Bat Creek inscription was one of these artifacts. Cyrus Herzl Gordon, an expert in Near Eastern cultures and ancient languages, believed that this tablet was inscribed in Paleo-Hebrew.

Gordon thought that this was proof that Semitic people visited the continent prior to Columbus. Later, the Bat Creek inscription, together with another artifact called the Las Lunas Decalogue Stone, were proven to be forgeries and Gordon’s claim was dismissed.

In 1996, Mark McMenamin, an American paleontologist, speculated that Phoenician sailors visited the Americas around 350 BC. He based his theory on some gold stater coins that were allegedly made by the state of Carthage. On the back of the coins was a map of the Mediterranean and another land on the west, across the Atlantic. McMenamin interpreted that land as the Americas but later discovered that those coins were actually a modern forgery.

Another form of written proofs that slightly goes in favor of the arrival of Phoenicians in the Americas can be found in Ptolemy’s Geography. Lucio Russo, an Italian physicist, mathematician, and historian of science, analyzed Ptolemy’s book and noticed that he gives the coordinates of the Fortunate Isles.

The fortunate Islands were a group of legendary islands mentioned by various ancient Greek writers. Russo also noticed that the size of the world in Ptolemy’s Geography is smaller than what Eratosthenes measured. After he gave the same coordinates of the Fortunate Islands to the Antilles, the map irregularities in Ptolemy’s descriptions disappeared.

Most of the modern-day scholars deny the idea that Phoenicians, Canaanites, or Carthaginians discovered the Americas first. Ronald H. Fritze, an American historian, says that although it was technically possible for those people to reach the Americas, it probably never happened: “No archaeological evidence has yet been discovered to prove the contentions of Irwin, Gordon, Bailey, Fell and others.

Since even the fleeting Norse presence in Vinland left definite archaeological remains at L’Anse aux Meadows in Newfoundland, it seems logical that the allegedly more extensive Phoenician and Carthaginian presence would have left similar evidence. The absence of such remains is strong circumstantial evidence that the Phoenicians and Carthaginians never reached the Americas.”Until some concrete evidence appears, this theory will remain only a fantasy.