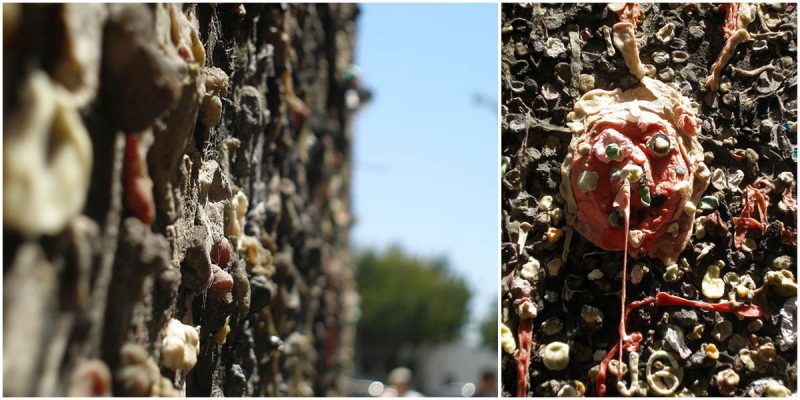 The “Bubblegum Alley“ is one of the strangest and most popular landmark attractions in San Luis Obispo, California

Bubblegum Alley is an attraction you can be a part of. The wall of chewed bubblegum in San Luis Obispo, Calif., has been growing since the 1970s. The sticky, colorful wall is a must-see for gum chewers and those who want to pick out their germaphobe travel companions.

This small alley is 15-foot (4.6 m) high and 70-foot (21 m) long lined with chewed gum left by passers-by. It covers a stretch of 20 meters in the 700 blocks of Higuera Street in downtown San Luis Obispo.

According to the San Luis Obispo Chamber of Commerce and Downtown Business Improvement Association, the origin of the gum is “a little sketchy”.

Some historians believe that the tradition of the alley started after WWII as a San Luis Obispo High School graduating class event.

Others believe it started in the late 1950s, out of the rivalry between San Luis Obispo High School and California Polytechnic State University (Cal Poly) students.

By 1970s, Bubblegum Alley was well established. When shop owners complained that it was “unsanitary and disgusting”, the alley underwent a full cleaning.

The gum graffiti survived two full cleanings. They stripped the alley of all gum, but the locals continued right on placing partially chewed bubblegum on the walls, bringing the attraction back to life.

Store owners’ complaints concerning upkeep are countered by the argument that it increases foot traffic and business. Debrorah Holley, the administrator of the Downtown Business Improvement Association, admits that despite the obvious problems it causes, it is nonetheless a landmark.

This one-of-a-kind spectacle attracts tourists to the downtown area, in such large numbers that there used to be a local radio station DJ that led people on bimonthly tours of the “Gum Alley gallery”.

The Alley has inspired professional artists such as Matthew Hoffman. On the east end of the alley, up high on the north-facing wall, a giant self-portrait of Hoffman titled “Projectbubble Gum” is created entirely with bubble gum.

The picture of the artist blowing a bubble required a tremendous amount of gum, which he was able to get with the help of the community. His theory is, “if an individual participates in their community they will earn an invested interest in their community.

The community chewed the bubblegum, and many individuals [felt] as though they were a part of its creation. This instills a sense of stewardship in one’s community”.

“Bubblegum Alley is a must-see in SLO because it’s not every day you can see an entire walkway lined with gum,” says Becca Norman, a San Luis Obispo resident who runs a blog dedicated to the city. “There’s a fair amount of bubblegum art, like the large mural of a guy blowing a bubble.”

Throughout the years, San Luis Obispo’s Bubblegum Alley has been featured on a number of television shows, news programs, and in newspapers around the world.